The Wizard’s Academy Kickstarter has funded – with a heap of bonus content! That content is applied to every copy of the game, whether it comes from Kickstarter or not. If you’d like a copy:

If you have a copy you may have noticed a slight discrepancy between the component count in the rules and the components in the box – this is due to an error in updating the rules for the extra content unlocked during the campaign. Basically your box contains more than the rules say it should! You can download an updated component count here.

If you’d like to see what the game is like, Rahdo gives his final thoughts here (and there are link to him playing a full game over an hour and a half if you want to see all of the gory details):

If you need to know how to play, then I give you the rundown in this video:

Wizard’s Academy is our next game, it’s a cooperative game of magical experimentation for 2-6 players in a couple of hours. It features a novel core mechanic, rewarding experimental and creative play, top quality art by Sean Andrew Murry and Ludwin Schouten and forty finely crafted miniatures realised by Justin Bintz. 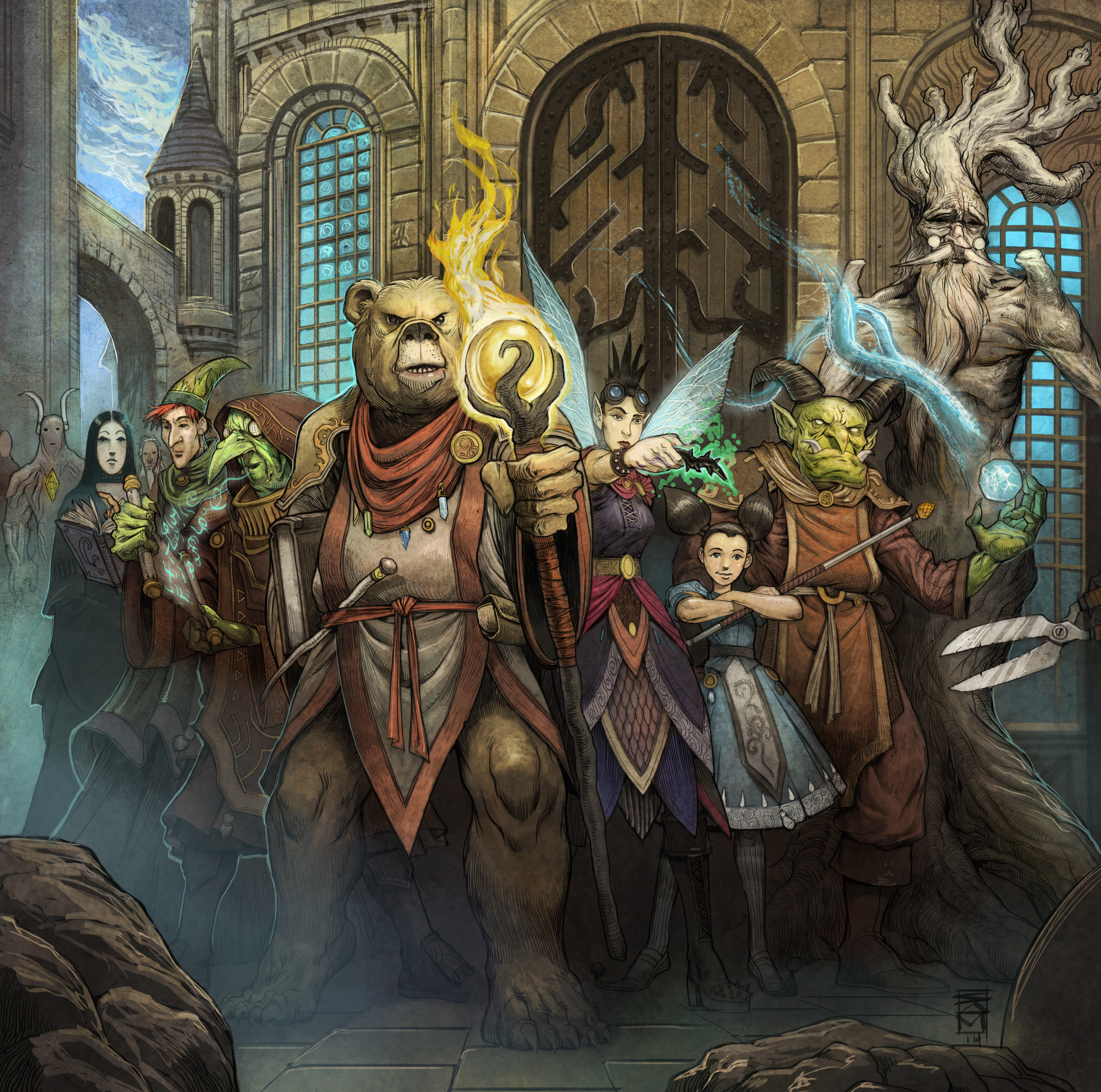 On entering the academy the new apprentices swore a solemn vow to learn the ways of magic, protect the institution and uphold its values. Unfortunately most of them have failed to learn any significant magic in their first year. Susie coasts by on her natural talents, Malkar’s tutors do not trust him enough to teach him well, Nyvetta has forgone the library along with opposable thumbs upon accidentally turning herself into a bear, Flitter is only here to steal magic items to sell on the black market and Bramblethrone spends too long talking to trees to get anything done. As a group of students they could not be worse. 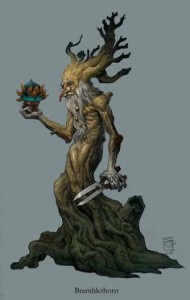 In each game the players select a scenario. Perhaps the students have decided to try to summon and bind a demon to steal its powers, the academy may be under attack by an army of Imps or in the most difficult scenario the students may be faced with an inspector whom they must impress with their mastery of magic. At first the effects of all of the spells are unknown, but as they try new things the students gain the power to manipulate the academy, the creatures within it and the fates themselves – hopefully achieving their goals before the monsters and elements that they’ve accidentally summoned reduce the building to smoking rubble. 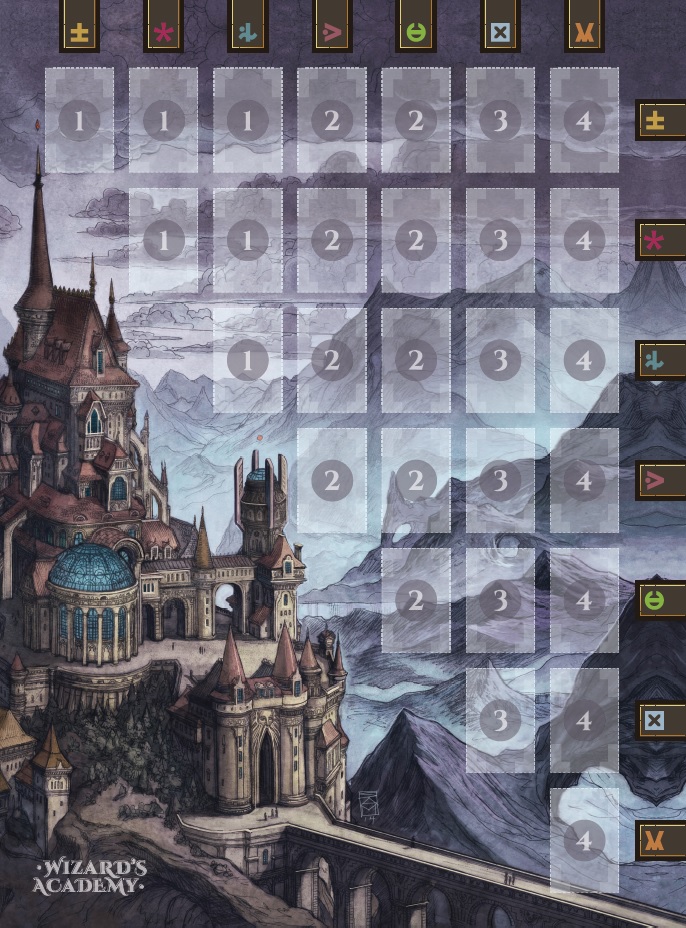 At the heart of Wizard’s Academy lies the spell grid. Each game this grid is populated by spells, some of them are fixed to ensure that there is at least one way to win, but the vast majority are randomly drawn from a large pool (with a particular ratio of helpful and unhelpful spells depending on the desired difficulty). Players are able to move around and collect glyphs in order to cast spells. Spells are the main way in which players interact with the game, allowing them to move rooms, defeat enemies, summon things, teleport themselves, create magic items, open portals, fix the decks, create golems and more!

A spell is cast by discarding two glyphs and consulting the card at the intersection between those glyphs on the grid. The spell then takes effect and is turned face down again. Periodically the face down spells are shuffled causing the players to lose their progress, but they are able to retain specific spells by visiting the library (if it is not too on fire / underwater / full of demons) and permanently locking them face up.

Wizard’s Academy scales effectively with different numbers of players as the obstacles to the groups progress mainly come from disaster cards and botched spells and their successes come from effective gathering and casting. A greater number of players increases the opportunities for both in equal measure, giving a consistent difficulty. Playtesting has shown that the game is as enjoyable with two players as it is with six. 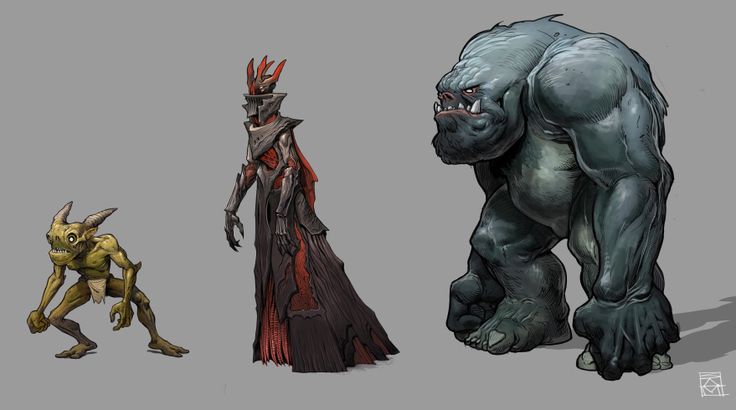 There is no single best approach to a problem in Wizard’s Academy. For instance if a troll is sitting on a glyph you need you have several options: You could kill it with an attack spell, move it with the scrying chamber, set fire to the room to incinerate it, create a troll proof robe so that you can ignore it, push it into a different room with the repel spell or plunge the room into darkness fooling the stupid creature into beliving that it is night so that it goes to sleep. Many of these options will be situational, depending on which spells are in a particular game, which glyphs are available and the current geography of the academy, but there will always be some option or trick to get you out of any situation. 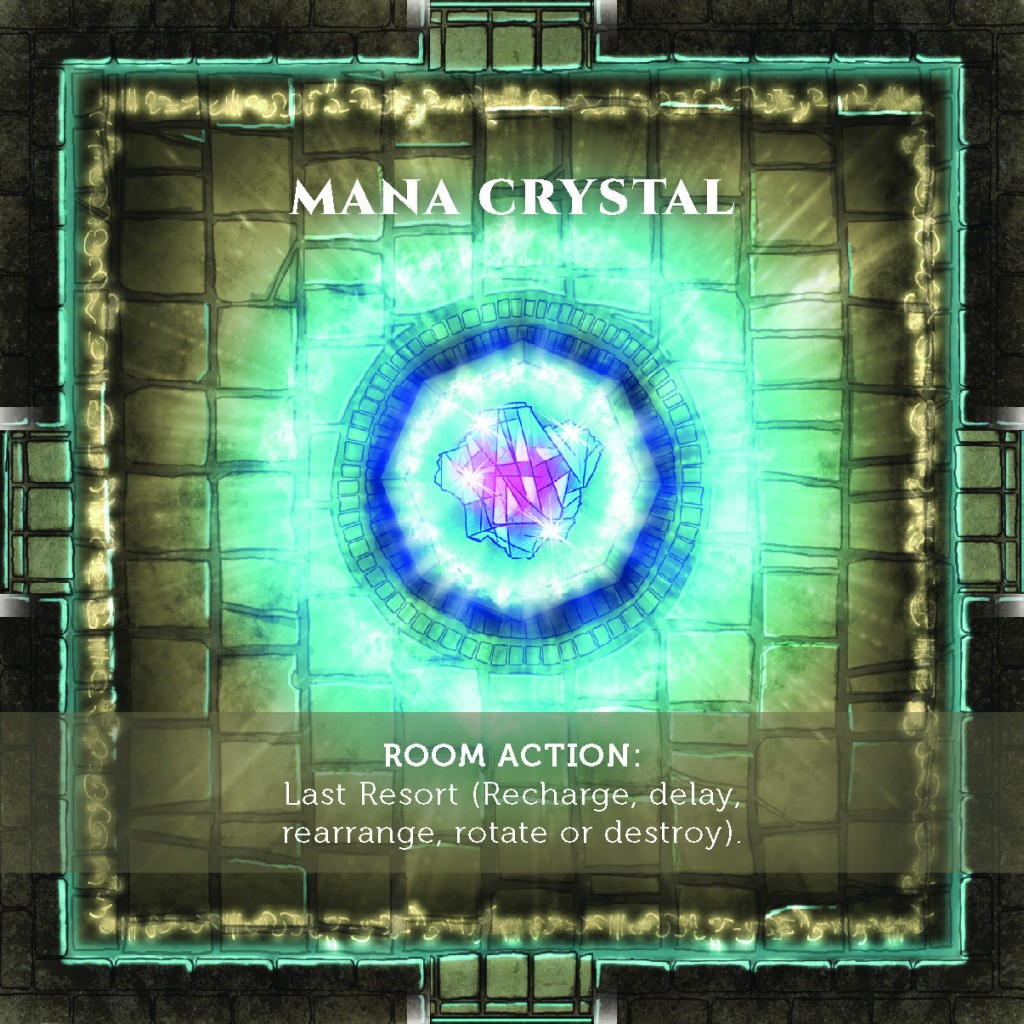 The mana crystal that powers the entire academy is benevolent and powerful. Whenever  a student dies it spends some of its valuable essence to save their lives and possibly teleport them to safety. If it runs out of charges then it will explode, taking the entire building with it. Mechanically this offers players a pool of shared lives rather than risking someone sitting out of the game for an evening.

Our success with 404 has lead us to increase our commitment to top quality components, the art budget is an order of magnitude higher and that is reflected in components throughout the project. 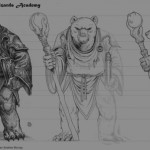 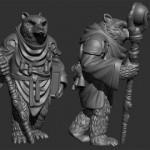 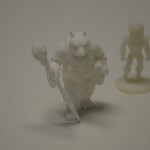 Wizard’s Academy ships with over forty miniatures representing the various apprentices as well as the imps, trolls and demons that may invade the academy!

Fires spread and water floods using intuitive but simple mechanics. High quality counters are used to track the environmental damage to the academy. 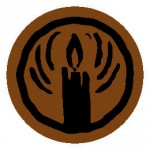 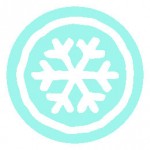 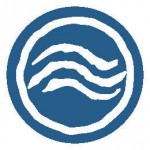 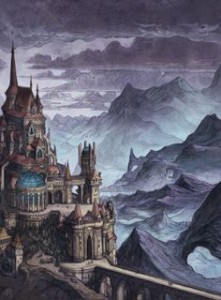 Wizard’s Academy comes with two full colour boards, one for the spells and one for the academy itself. 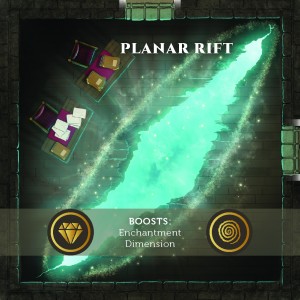 The Academy is made from individual rooms that can be moved and twisted by the players or other magical forces. 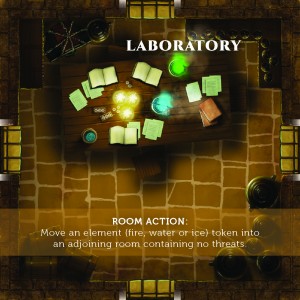 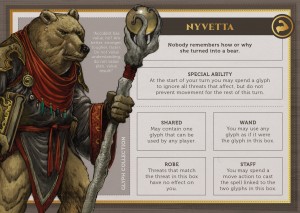 Full colour player cards indicate each players special ability and magical specialisation as well as giving them a convenient place to store their glyphs.

If you’ve got any comments on Wizard’s Academy feel free to leave them below, drop me an email or visit the boardgamegeek page.

If you want to get a copy for yourself you can grab the digital version through the Steam store (Requires TTS) or a physical copy from a participating game shop (mostly in the UK) or through our website (worldwide).