I’m fairly confident as a game designer, while I’ve still got a lot to learn I’m very happy with the work that I’ve done and have good reason to feel that I’m writing rules that make for an enjoyable experience. On the other hand I’ve only been in games publishing for a year and feel that I’ve got much further to go in this respect so I tend to use this blog to write about design topics rather than publishing topics. Today I’m going to break that pattern and write about a publishing decision: The inclusion of models in Wizard’s Academy. 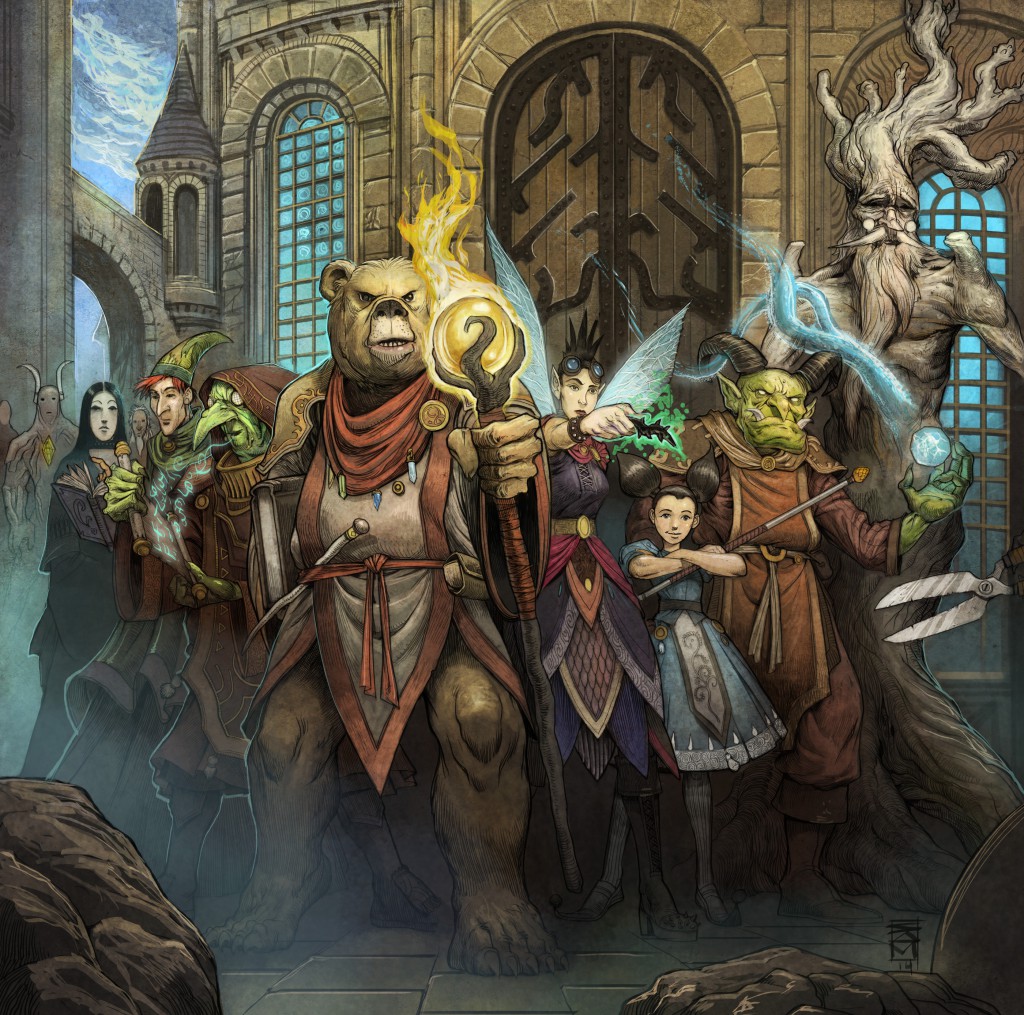 At the time this decision was made Wizard’s Academy had already been through a few iterations. It wasn’t yet playtesting smoothly, but it had that spark that electrifies players. Sometimes it’s apparent when a game is either doing something new or generating some new combination of emotions and thoughts in its players – it doesn’t mean that a game will be successful, but it means that it could be if handled well. The prototype for the game uses a large collection of counters to represent Imps, Trolls, Demons and various other things inside the academy, a decision needed to be made on whether these should remain tokens or become models.

The difference is stark. A tokens version of the game might cost £30-40 and require a kickstarter target of £20,000. A models version may be closer to £60-70 and require a total goal closer to £50,000. I knew that the game itself was good and could work in either format, a lot of advice concerning kickstarter is to pitch a basic version of the game and make a deluxe version as a stretch goal – but that’s not really an option here. In order to be economical we’d need to produce enough models for all of the games, having two versions wouldn’t fly. The miniatures addition doesn’t work as a stretch goal because it doesn’t matter how high the total funding gets, the extra cost would make each game cost more to produce and ship than the pledge to receive it. Additionally we’d need to invest some £10,000 in art several months in advance in order to have the miniatures ready to go on launch. A decision needed to be made one way or the other.

To an extent the decision was out of my hands. I work for 3DTotal, an art publishing company, and need to answer to my superiors here. There are a lot of reasons that it makes sense for 3DTotal to work on a miniatures project at this juncture, a few of our recent projects have been very successful so it’s natural to want to take advantage of the opportunity to invest and produce a really top quality project. It also makes sense to leverage our advantages as best we can, as a successful 3D art company we’ve got access to an excellent collection of artists so it makes perfect sense to develop games that make the most of this. I also know that the success of projects like Zombicide played a part in the decision to expand into games in the first place and that’s created a temptation to move towards similar forms of game. Putting all of this together there is a strong argument for 3DTotal to work on this sort of project, but I don’t think I can reasonably offload responsibility here. I signed off on developing Wizard’s Academy as a miniatures project, though my reasons were somewhat distinct.

I tend to approach things from the perspective of a gamer, asking “What would I prefer to buy and play?” This is probably why I work for a company rather than running one. Still, the question seems valid to me, will the models improve the game experience sufficiently to justify doubling the price? The tokens can look a little bland and there is a visceral joy in seeing the academy totally overrun when everything has gone wrong and trying to salvage a win against the odds. I know that art in games means different things to different people, so we commissioned one model and turned it into physical reality (using sorcery and 3DPrinting) so that I could show it to a few people and get feedback. Some people were really excited by the direction, others understandably apprehensive, but ultimately the larger consensus was that models would be sufficiently cool to make the game even more of a joy to play.

I find the direction terrifying and exhilarating all at once. It will be awesome to see all of the characters fully realised and to see the academy overrun by a horde of imps. On the other hand I think that anyone who’s been studying kickstarter should be terrified by the prospect.

Let’s talk about Zombicide for a minute. CoolMiniOrNot asked to raise $20,000 to create the first print run of a light coop game about zombie bashing. The miniatures were a big part of the sell (“71 great miniatures”, it’s right there in the tagline). They made a whopping $700,000. A lot of things contributed to their success, too numerous to list here in their entirety, but the important thing is how widely recognised.

Following this everyone and their cat decided to show up to collect their $700,000 only to be shocked and alarmed as somehow their project – with equally great miniatures (many of them zombies) – struggled to find a similar level of success. It is a very easy project to try to replicate and fail (and fail hard).

I think the trick here will be not to try to replicate it. People already have Zombicide and it’s sequel, why would they want another? I feel that one of the main reasons that it worked because it had something unique to offer that previous games had failed to deliver on. It’s not possible to copy that.

So I’m not going to try. If this is going to work then Wizard Academy needs to stand on its own and announce very clearly what it has done that no other game on your shelf has achieved and I think it can do that. More than any other game I’ve played it delivers on the promises of discovery and freedom. If you’ve been following this blog in the long term you know that I’ve been actively analysing how many games it will take before the average player no longer has a new spell to discover (Eleven, some thirty hours of gameplay, at last count – but I’d love to up the spell count through stretch goals). I’m focusing on creating problems that can be solved in dozens of ways and then tinkering with mechanics to make the effectiveness of those solutions vary from game to game to actively reward experimenting with new strategies. The feedback from testers so far has been very positive, I think that as a direction it’s working and that it’ll genuinely bring something new to the table.

So there you have it, the reasons that underlie the decision. The fears that it produces but the reasons for hope that it’ll succeed. I’m looking forwards to having physical copies of all of the components and seeing how it looks when it’s all together, I think it’ll be breathtaking! The project is ambitious, but achievable. Wish us luck!