Every now and again I briefly recall that in my first post I promised that this blog would talk about what it’s like to go from being an academic to a full time game designer and all of the experiences that I’ve had along the way. It seems that in general people enjoy my broad and unsolicited advice on the subject more, but today there’s a chance to do both. I ran a stand at a big convention for the first time ever this weekend! 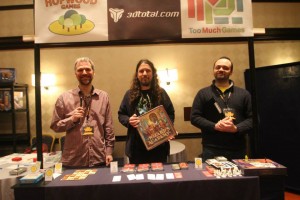 I took to the stand as one of a team of three game designers showing off our latest work, that came about as the result of a series of happy accidents, but ultimately ended really well. I work for 3dtotal, who are an art company that’s recently branched out into game design. They’re not sure if they’re going to continue game design and grow my department into a significant portion of the company or if they’ll get out of the board games industry while the getting’s good. As of last year a big part of that decision was the Wizard’s Academy kickstarter, if it had failed it’d probably have been the last game that we did together. As it was we raised £42k and 3dtotal want me to make at least two more games with them, however by the time the KS was over and we knew that all of the stands at the UK games expo had been booked!

Simultaneously, prior to the WA KS I was only working for one day each week, as there wasn’t a lot of work for someone who was mostly spending their time emailing people to make sure that they were still doing what was promised. In the month beforehand I was full time again for a while, doing all of the vital KS prep, but before then I had a lot of time on my hands. During that time Andy Hopwood, of Hopwood Games made a suggestion to me and JP Treen as fellow Birmingham based game designers: What if we combined our talents in order to make a game that was designed by all of us and launched it at the expo?

I was excited by the idea of that sort of collaboration and have really enjoyed Andy and JP in the past so jumped in. I agreed to contribute 1/3 of the design and pay 1/3 of the setup and production costs in exchange for 1/3 of the profits – we’re quite fair people in that respect. Andy and JP were already sharing a stand at the expo and they were planning to sell our new game there, so when we needed a stand and none were available I went to them. We struck a deal in which 3DTotal paid for some of the stand cost, I got to use my stand time to sell 3DTotal games in proportion of the amount they paid for the stand and could enjoy the expo or help work on our shared project the rest of the time. I’d seen prototypes, but it wasn’t until I got to the expo proper that I saw my first copy of the fruits of our combined labour. 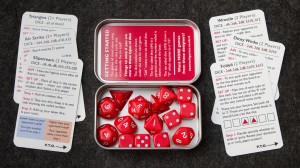 Six types of dice, six games (2 each) for six pounds. We called it 6. It was a neat pitch and I felt a really fair deal considering that £6 doesn’t normally get you 15 dice even without the rules and the shiny tin. As you can see from the first photo we set up the stand with Hopwood games products on one side, 3DTotal on the other and ‘6’ in the middle. JP’s company Too Much Games didn’t have anything new to sell that year, but he had a table for demoing his latest prototype so that he could develop his work further.

It was really nice to have a situation that was based on so many people and companies cooperating with a genuine eye to the common best interest of all, but I did feel the tug of divided loyalties. I was keenly aware that I wanted to contribute as much as the others to the success of our joint venture, but also knew that 3DTotal were footing some of the bill for the stand and paying for my time while I was there so I needed to show off their stuff too. It’s important to know that none of this pressure was external, Andy and JP didn’t push me over ‘6’ and Tom (My boss at 3DTotal) did nothing to pressure me either – but they’ve all treated me well and when people treat me well I want to do right by them.

In the end I need not have worried, our stand had a very “One for all and all for one” feel. There were times that someone would come and look at Mijenlieff (A game that’s nothing to do with me financially) and I’d demo the game and how to play it and sell a copy if they wanted one. There were times that I went to lunch and came back to find some hastily scrawled email addresses that Andy or JP had taken down from people who wanted to pre-order 404 or Wizard’s Academy as soon as they were available.

The plan of only being on the stand for half of the time utterly failed though. In principle we had two demo tables, Andy paid for half of the stand so got the exclusive use of one and me and JP paid the other half between us and so had to share. In practice we could demo a lot of our stuff on the stand itself there was room for two of us (or three at a squeeze) to be doing it at once. It’s no exaggeration to say that I found a sum total of fifteen minutes to enjoy the expo and that’s only because just before the final closing time I went “That’s it! I’m seeing the world beyond this stand.” and literally ran around the halls, stopping briefly to ask the price of anything that caught my eye, just about covering most of the stands with enough time free to go back to the most attractive offer and pick it up – which was a copy of XCom (about which I now have opinions, I enjoy the game itself and love to see new technologies being used, but I’m keelhauling the next person to deny my a physical rulebook – I think dissecting the game is probably next week’s post).

Financially I think things just about worked out. We (3dtotal) spent maybe £150 exhibiting and got back a little over £100 in sales. The lost money was utterly worth it though, as a whole bunch of people signed up for updates and if just one backs Wizard’s Academy we’ll break even. If any number of the contacts that we made pay off or if any of the interviews that I did yield some more support (and I’m sure that they will) then it’s all gravy. In terms of Six I think I’ll be a about a hundred in the hole after the final accounting, but we’ve plenty of copies still to sell and it seems reasonable to believe that they’ll do well. Personally I spend £toodamnmuch on the food prices vans can charge to a captive audience but wouldn’t give the experiences I had up to get it back 😀

There were a bunch of things about running a stand that I’d not fully appreciated until I actually went and did it.

I did not expect what would happen to my voice, it turns out that spending six to eight hours a day talking to people in a noisy room turns your throat to gravel in approximately no time flat. When I worked on stage we did vocal exercises to prevent that kind of thing, it’s no exaggeration to say that actually preparing for this in terms of your diet, exercise and how you use your voice while at the con is probably a good idea.

I did not expect so many people to come up to me enthusiastic about my games. I knew that playtesters had said good things about 404 and that reviewers had liked it too, but I didn’t really appreciate how the bell curve works. Wherever the centre-point is there are people to either extreme of that and they’ll come and tell you what they thought. Overall the centre-point for opinions of that game is in a good place so it was a hugely rewarding experience to have people coming up and telling me that they loved my game so much more than I do.

I did not expect what a difference the physicality of a game would make. I didn’t start out with the Prime Wars cards or the Wizard’s Academy minis on the table, but I wish I had! As a designer who cares about mechanics first it’s easy to forget about the flash, but in a room of hundreds of designers each with their own stuff to show, flash is what counts. 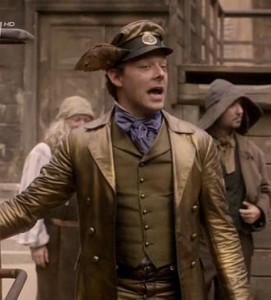 I didn’t really expect how rude people are. The number of people who stare at you like you’re in an aquarium and then pretend not to notice you when you say hi was staggering. I thought that the socially awkward nerd was a baseless stereotype, come on folks, we can be better than that!

I also didn’t expect how lovely people are too though. There’s so much shared passion from gamers of all stripes and it comes across really well, there’s definitely a buzz to these events and it’s great to get caught up in it. Other industry professionals too, I spoke with other designers and manufacturers and publishers and even appear to have sprouted a business card for a lawyer who has some sort of game related speciality. It was delightful to meet Ricky in person, he’s just as nice in person as he is on camera 🙂

I guess that a lot of this implies its own advice, but I’ll spell it out anyway: Get a stand, get it with friends, work on several projects at once, do interviews, share your enthusiasm and bask in the enthusiasm of others!

In terms of mistakes: It’s better to have products than pre-orders by a long way. It can be sad to have something that looks fantastic but doesn’t play so well. Testing prototypes is nice but only if they’re quick. Bringing a packed lunch sounds like a super idea. Maybe take more than 15 minutes break per 22 hours of demoing and for the love of god do something to protect your voice.

Actually perhaps one of those is the answer to the other 😉

The expo was a fantastic experience and having recommended it as a gamer in previous years I’m now happy to recommend it as a creator. Thanks to the UK Games Expo Team for putting it on, 3DTotal for hiring me to design and show off games and Andy and JP for letting me share their stand 🙂