I don’t want to dwell on this, but I think a 2 month gap in posting needs some explanation: My health problems were somewhat worse than anticipated. I’ve spent most of the last 5 months in bed. I am very bored of bed. The next 5 months are supposed to be better, but there are no guarantees. I am probably not going to die before you do. I am going to try to attend MCM and UKGE and give SatW the attention that it deserves. Few people read this blog for news about me, it’s about game design tips and seeing the inside of the game design world. To that end, let’s talk about three lessons that I’ve learned through card design in SatW:

I wanted the game to have a bidding element in which players were trying to anticipate and exceed their opponents bids. So I wanted the rule “The highest bid wins”. In an ideal world I’d leave it at that, but sometimes players would rudely bid the same amount and since it’s a think that *can* happen, the game needs a rule for when it *does* happen.

Some games will dodge this sort of problem by other means. For instance by setting up resources such that one player will always get a +0.5 bonus and having all other values be whole numbers, so that a tie is impossible. You’ll also see games that use a required rule to solve another problem, such as by breaking ties in favour of the losing player and creating a catch-up mechanic. It is an art to elevate a solution beyond “solving this issue” and to “improving some other aspect of the game”.

What I learned from the Brother Belgium card was the power of allowing game effects to mess with these “needed rules”. It’s tempting to focus on the things that are at the forefront of the game, but tweaks to the grist can offer a meaningful advantage to one player. It’s important for a bidding game to have cards that offer such a notable advantage, to create competition between players who want the advantage and players who want the card for it’s victory condition. 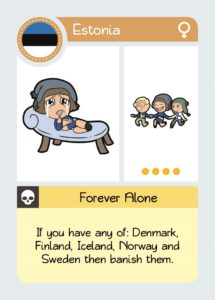 Being designed for fans of the webcomic, the SatW game is going to include a number of jokes or references for that audience. These cards don’t have a lot of room for flavour text, so the references have to come across mechanically.

Sister Estonia is a card I’ve had some consternation over. In the comics Estonia wants to be considered a Scandinavian country and thinks of herself that way, but none of the other Scandinavian countries see her as one of them. In the card game her “desired item” is a picture of her holding hands with Sweden and Finland and skipping merrily onwards. This desired item is listed as having a value of 4 coins, though item values only go up to 3. Of course, this is because the card for her acceptance isn’t in the deck, Estonia will always be alone.

The worry for me is that people who pick it up in order to play the game but who haven’t read the webcomic will be confused or cheated by this. They’ll think there’s  a card missing from their deck, or they won’t “get” why there’s a reference to a card that doesn’t exist.

What I learned from Sister Estonia is that I shouldn’t underestimate my audience. In testing a fair portion of groups simply don’t notice anything is wrong – there’s a big item deck and it’s not that surprising if one for a particular character doesn’t come out. Others recognised the four coin cost as being unusual and flicked through for it, but seemed delighted to find it wasn’t there. Perhaps pleased to have noticed something unusual and worked out a secret from it? A few got interested and looked up the comics about Estonia to see what was going on.

Nobody was upset as I’d predicted. A secret, with some clues and the option to find out the truth of the matter, seems to be a powerful thing. Of course I’ll still mention that it doesn’t exist in the FAQ of the rules, but it’s been surprising how well received it was for a factor that I thought I’d have to balance between comic fans and game fans. Maybe some less explicit hints about setting would give future games more depth. 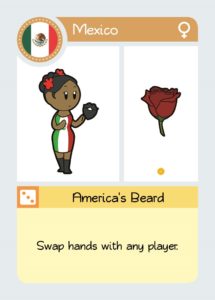 While it seems a shame to end on a negative, I’d like to talk about something that didn’t work, because the player psychology around it is interesting.

Some cards are based around adding mechanisms for properties that I want the game to have. For instance the desirability of a catch up mechanism means that there are cards along the lines of “Steal a thing from the player with the most satisfied characters”

One of the “not particularly interesting” dominant strategies was to accumulate items every turn without ever bidding more than zero – until a character comes up that you have the item for – then bidding so heavily that you can’t lose. The consequence of this was that the core of the bidding game didn’t function because all bids were either “0” or “MILLIONS” so there were no close decisions or times people were wishing they’d decided to bid a couple more that are the bread and butter of bidding games.

My ultimate solution to that problem took a different form and is perhaps worth an article at some point, but an intermediate solution that didn’t work was to include characters that punished hording items – in this case by swapping hands of items. In the end that didn’t work out because no matter how many such cards I included players would continue to hoard and attribute failures to “bad luck that the hand wipe card came up when I had a big hand”.

The moral is that most players don’t study the make up of the deck – I might know that in 98% of games each player should expect a hand wipe – but if the game doesn’t flag this for the player it happening is a “feel bad” moment that seems like sucky luck or an unbalanced card – which is something to be avoided.

And perhaps there is a happy ending: Sister Mexico got to stay in the game because testers liked her for other reasons. When you’re choosing what to bid she generates an interesting decision: You would like to bid enough to leave you with the 2nd largest hand, so that the player who selects her does not steal it from you – but you do not know what everyone else will bid, so the correct bid to leave yourself in that position is based on your mutual expectations of each other. Of course you could just bid everything in order to obtain her and swap your newly empty hand for an opponent’s – but you have to be confident of having the most valuable hand or else you may be giving up everything for nothing. 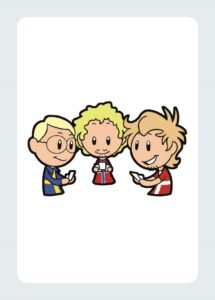 SatW has been a blast to work on and is maybe less crunchy than other games I’ve worked on because of it’s theme and target audience – but that doesn’t mean it’s not presented a medium to try some new things and has shown me some interesting things about design along the way. Hope that it has some value to you, until next time: Happy gaming and maybe see you at MCM or UKGE 🙂