I’ve been working with a graphic designer on the cards for Nightmare and have been treated to more of a close up look at the process of designing the cards than I’ve seen before. I wanted to talk about textures because I was particularly impressed with what a stark difference they made to the cards. I don’t have an image of the untextured card, because we didn’t save that one, but it looked something like this: 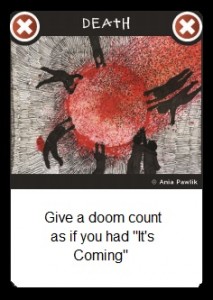 It felt like it had a long way to go – the text elements were in place and the card layout broadly looked right, but there’s something very cheap feeling about big blocks of solid colour. The effect seemed even more pronounced with cards that used brighter colours, black suits minimalism in a way that bright yellow just doesn’t.

However with a couple of very simple changes it feels like a much more complete card. Taking the block of colour and applying it as a filter over a texture and making the text box slightly transparent generates a card that looks like this: 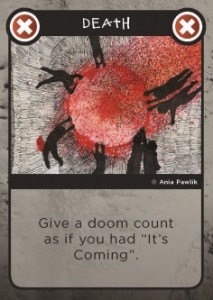 So why am I bringing this up on a game design blog? Surely if you’ve hired a graphic designer you just point them at the job and take their advice, after all I’ve written about the value of trusting your experts before. However your experts are only as good as the brief that you give them. If you say to an artist “Draw me a picture” when what you want is a picture of an Elephant then the odds that their efforts will satisfy what you’re looking for are pretty low.

It hadn’t occurred to me to specify textures before seeing the process. Initially the cards got a papery texture because, well they’re cards, it’s a good texture for a card. It looks cardy. However seeing how this part of the process works provided the inspiration to go looking for thematic textures to help the graphic design support the art and the game to create a more coherent whole. Have a closer look at the texture for the ‘death’ cards. 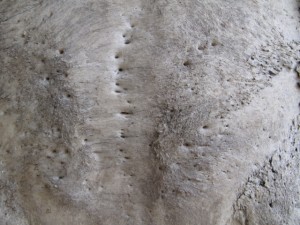 It’s an close up of someone’s … I think forehead. The close up is extremely close, such that it goes past the skin and other grist and gets straight to the skull. It’s not a very familiar texture – or at least not to me – I don’t know what you do in your free time. Yet when we stuck it on the death cards it felt right.

We wound up searching for thematic textures together. We both work for 3DTotal and it turns out that we have a pretty sweet free texture gallery for all aspiring artists. A lot of what we wanted came from here, but occasionally there was something we just couldn’t find. I wanted something that looked somewhat that looked quite biological, perhaps cellular, for the mutation cards, but we didn’t have any textures like that. Ultimately we wound up with this: 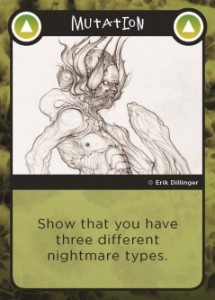 The thing that I love about this is that it looks like we’ve got something relatively squishy and organic in the background – the colour filter helps with that quite a lot. Nature is full of fractals and some things look enough like other things that without a sense of scale or colour they’ll pass for each other. Can you guess what you’re actually looking at before clicking on this link to the original?

This process was quite a lot of fun, but there’s a serious point here. I’m afraid that it’s far less convoluted than my usual conclusions but I just wanted to acknowledge that there’s something that I’ve failed to consider in my previous games that I now see the potential of. When working with artists or designers on anything that’s going to have text boxes or icons or other elements I’m going to talk explicitly about textures with them.

It’s still best to trust your experts and believe that they know better than you about their fields of expertise. Being too limited in my brief would’ve served me poorly here as a number of textures I picked out were unsuitable for reasons that were esoteric to me but obvious to a skilled designer – but opening up the dialogue of being able to explicity talk in terms of “I’d like the texture to remind people of…” or “Do we have anything that looks like one of these five…” has really helped the project. 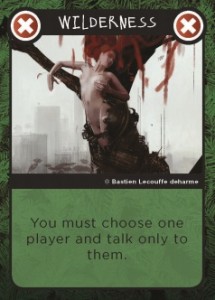 If you’re a game designer hiring an artist talk to them about textures, because handled well they really help to make your game look epic.

1 thought on “Textures are Magic”