I’ve been seeing a lot about Tabletop Simulator recently, a virtual environment for playing board games that some creators have been using for easy prototyping. I thought that for today’s post I’d crack it open and throw a recent prototype into it, in order to see how it works and gives some impressions of the thing.

At the moment the game is £10.99 on Steam, which is very affordable from a designer’s point of view, but I’m not sure how that price tag would affect possible playtesters. I doubt that anyone would pay that price to test a solitary game, so it’s hard to bring over existing testers who aren’t already interested in it for some other reason. On the other hand that price allows people to join any game, playtesting or otherwise, so it’s likely to be a very fine deal to people with broad interests.

Looking at the lobby there’s a fantastic amount of board game piracy going on here, something that’s traditionally not been a big problem. About two thirds of the games on offer are recognisable titles for which I doubt the publishers have given permission. In particular I note that there are three games of Magic: The Gathering running using scans of cards. Presently it’s probably too small to be noticed, but if the platform really takes off I can imagine it vanishing in a puff of cease and desist orders.

A quick run through the tutorial teaches me the basics of how to import and use game components. Generally the systems seem pretty good, in some cases superior to physical cardboard, in other ways inferior. I can imagine a deckbuilder running well here, as shuffling a deck of cards is much faster and easier than it otherwise might be. On the other hand it’s hard to imagine playing liar dice, as it’s very challenging to lift a cup and have a look at the dice underneath without sending everything spiralling into oblivion. 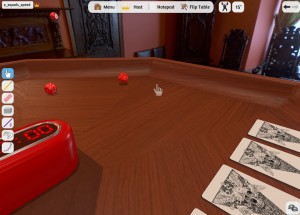 The cards are generally pretty slick though. Click and hold to grab a deck, click and drag to grab one card, F to flip it over, stack them on top of each other to make a deck, wave the cursor around while holding a deck to shuffle it. Hovering over a deck shows how many cards it contains, hitting ALT while hovering over a deck or card shows a large version. This all seems to work pretty well and I’ve got a few prototype card games to try so I’ll have a go at uploading one.

The method for this isn’t hugely apparent, but a bit of googling makes it clear. To save you the trouble:
Look in the game’s director for a folder marked “Modding” in which is the folder “Deck Templates” which contains two images. These each have numbered cards, simply replace each number with the images and text that you want on that cards and you’re good to go.
Upload that image someplace, then click on import custom deck. Give the URL for the template in the first box, the URL for an image for the back of the cards in the second and drag the slider to tell it how many cards there are in total. The whole thing took about twenty minutes (mostly spent copy-pasting card images into a big jpeg) and my game was playable in the simulator. 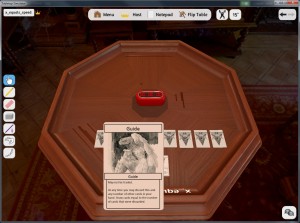 This game needed some modifications for the simulator, most notably that big clock in the middle of the table. Normally one (or more) players would be counting down from ten at any given moment, but that makes everything else incomprehensible in an internet conversation so instead I pulled an electronic timer from the simulator’s virtual bag of stuff and used it instead. I also adjusted the time limit from ten seconds to sixty, as communicating and physically moving stuff around is likely to take longer in this kind of environment. All that was left was to sit and wait for some players to try it out.

By which I mean “Fire up wordpress to write today’s blog post while waiting and get so distracted by thinking about the simulator that I failed to write about any other subject.”

The first player to join flipped the table and ran off. The second was more creative, enlarging the alarm clock until it covered the table and shrinking decks of cards and trying to hide them under other decks of cards while I was dealing with that. It starts to become apparent why the vast majority of games in the lobby are passworded. This is a troubling development as most of my existing testers can play with me in person, but if I lock the game I can’t easily be welcoming to the existing community. This sort of thing has the potential to undermine the platform, if players split into insular groups locked away from each other by passwords designed to keep the trolls out. The sort of thing that could make it great would be a thriving community of strangers joining each other and experiencing new games or new ways of playing old ones – basically everything that’s good about gaming as a hobby 😉 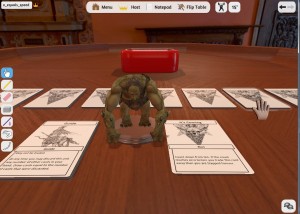 On a troll related aside, the simulator can import 3D models and use them as pieces. That’s not helpful now, but I can imagine doing a lot with it when it next comes to make a game with minis. Heck, all of the models for Wizard’s Academy are available to me in a format that should upload into the simulator. I’m sure that I can do something neat with that.

Following these I had some really nice people come and join my table. Sadly we didn’t get to play, this was a trading game and requires at least three players, but there was never more than one other available at a time. It was enjoyable to meet some nice people and talk about the game, even if we never got to play it and they both added me on steam in the hopes of getting to play this at some future time. Ultimately it didn’t lead to a successful playtest though.

I’m not ready to give up on the software yet and I’ll probably keep it open until it’s time for me to leave the office…or some people could join my lobby and agree to play right now literally as I’m typing this!

I’ll be right back.

Alright, that was interesting. The players seemed to enjoy doing it, but the game definitely didn’t work. Everything wound up in a bit of a mess: 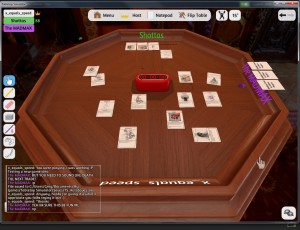 A time sensitive game was perhaps not the best choice for TTS. While increasing the time to a minute helped, we still wound up if stray cards on the table and nobody really having the time to straighten a few cards up in what would be a trivial gesture on a real table. It was a great experience to meet a couple of players and have them trial a game though, something which definitely convinced me that I should upload more prototypes in the future.

I suspect that to get the most out of this medium you’d want to design games with the following attributes in mind:

Since I’m presently tasked with generating a few different card games I may well have a shot at developing something optimised for TTG and see how that flies. I don’t see it as a replacement for meatspace playtesting, but I think that used effectively it could become a neat addition to my design toolkit.

If you’d like to get a copy and join in some games sometime, it’s on sale here 🙂