Among other things, I grew up playing Titan. For those who aren’t familiar with it, the basic pattern of the game is that you start with a titan and a few other units and move about a strategic board using your existing units to recruit better units. When your units run into your opponents units then they’re moved onto a tactical board where they have a fight. The winner – in addition to having killed some things – gets some points which translate into recruiting special units and more power for their titular titan. A player who loses their titan is eliminated and the last player left standing wins. When my father was winning a game, the closing moves of the game would often look like this: 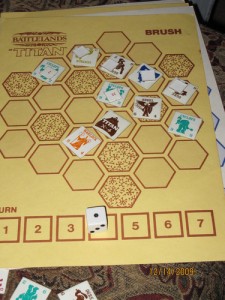 A player in a winning position could generally afford to hammer their opponents titan group with wave after wave of units, using their strategic advantage to recruit units more quickly than their opponent could possibly defeat them – such an approach would guarantee victory – but our games never ended that way. Instead once he’d identified where my titan was his titan would come to meet him for a final battle, the strategic advantage usually translating to an advantage in that battle, but not an insurpassable one – especially for a game with lots of dice.

Because young children are basically selfish jerks with no conception of other people’s emotional states I always figured that he made a mistake when he started these climactic final battles, but with a more mature attitude towards gaming they seem a manifestation of sportsmanship in gaming. I tend towards defining this as “The decision to take actions which prioritises enjoyment (especially for other players) over winning.”

That covers a fairly broad range of behaviour from stronger players taking a handicap down to letting your opponent take their move back after taking their finger off the rook. Generally this sort of sportsmanship is a good thing, enhancing the game for everyone, so let’s talk about why it’s evil and to be avoided. 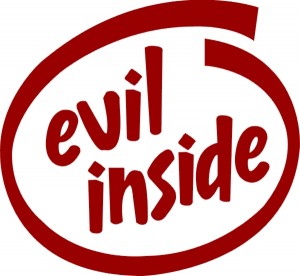 There are a lot of motivations for playing games. Some people want to hone their skills, some want to explore the game space, some want to generate cool stories, some want to socialise, the list is endless. It’s easy to forget that another player’s priorities might not be the same as yours, so while you might think it sporting to allow them to take back a mistake they might prefer a deeply competitive game in which every player uses any (in game) advantage available to do as well as possible. Heck I’ve come across a very small number of players who consider out of game advantages fair play too and enjoy games more if they’re used against them, though even then there’s probably a limit somewhere. The point is that while well intentioned an act of sportsmanship will diminish a game if it’s not in tune with what the players want out of the game.

So what does any of this have to do with game design?

Simply put, games exist that require different degrees of sportsmanship applied in different ways. I suspect that sometimes this is a concious design decision and sometimes it isn’t, but we can all think of examples of games that rely on players acting reasonably in a way that can’t be adequately conveyed by a strictly worded rule.

In some cases these are relatively trivial implementations. Playing Starship Troopers against a friend a few weeks back we wound up playing a scenario in which he had a city to defend with various communication towers, waterworks and so on. My MI were faster and better equipped but his humanoids were more numerous and scored (many) more points for eliminating me than I did for eliminating him. Early in the game I hit a unit and went one point ahead, at that point I could practically guarantee victory by just running away and hiding on the other side of the map until the time limit – but while undeniably effective I think that most people would fairly identify that as unsporting. In principle it’s a weakness of the game’s design that there should be a strategy that’s effective but not fun, but as a designer it seems fair to leave in such a weakness (remember that counteracting a problem often inccurs a cost in some other part of the game) on the grounds that only a vanishingly small part of their player base will exploit it.

In other games the extent to which a designer chooses to rely on the sportsmanship of their players is more nebulous. There are a lot of games identified as having a kingmaker problem, in which a player with no chance of winning can choose who wins, possibly punishing the player who played the best game out of spite or just out of a desire to have had an impact on the final state of the game.

A designer could take the approach of relying on players to play sportingly within the context of their group. Some groups might decide that petty rivalries are part of the fun and make who you upset an implicit part of the game, others might be interested in pure strategy and have the informal agreement that a kingmaker stay out of the race for first and second. However when a designer does this their game becomes an enjoyable experience for a smaller portion of their audience and even those who can enjoy it may feel that having to arbitrarily restrict their own actions is tiresome and should have been avoided with a more elegant design. Ultimately I think that the safest conclusion is that anytime you are relying on your players to play in a particular way, that is counter to the most effective way to win the game, you’re weakening your design.

However design is often about trade offs, there may be times that such a weakness is justified in place of a greater cost elsewhere. I may have encountered one in the design for Nightmare, but I’m still debating it internally. The game calls for a player to count down from ten, with the group losing if they reach zero – however the when that player trades their trade partner starts the count from ten again and in this way the game forces a move every ten seconds until the players are victorious or defeated.

In playtests some players count more quickly or more slowly than others, that seems only natural, but as a cooperative game in which running out of time is bad there’s a natural incentive to count as slowly as possible giving the group an infinite amount of time. However almost nobody seems to do this, I’ve seen one player count unusually slow but even then it wasn’t obscene. I’ve had exactly one report from a playtest I didn’t attend identifying slow counting as a problem. It seems that the average player will give a reasonable amount of time and – this is actually pretty good for reasons I’ll get into in a moment – often slows down when their count reaches the “3…2…1…we’ve all lost” state. 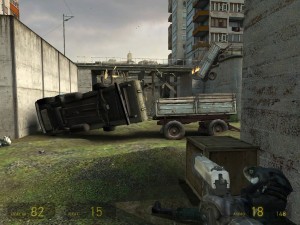 Hmm, I wanted to look this up and confirm that it’s not a myth, I can’t find a source now but let’s talk about it as if it’s true anyway because even if it’s not it’s a cool idea: In Half Life 2 health displays appear to be linear with each hit doing a certain amount of damage and the player dying on hitting zero health. However the game scales damage such that the player takes smaller amounts of damage the less health that they have – meaning that 50 health does not represent the ability to sustain twice as many hits as 25. The result of this is that the player has a lot more tense “Oh god I’m going to die” moments than would normally be expected because the ‘low health in trouble’ part of the game is recognised by the developers as one of the sweet spots and there’s some small behind the scene foolery to make sure that players spend longer in the sweet spot – as opposed to dying and restarting which is typically a much less enjoyable part of the game (though Valve did a lot to minimise its impact compared to other titles).

I find it hard to get upset about players giving themselves slightly longer in the “3…2…1…lose” part of the game because in watching players emotional reactions to the game it seems to improve things. Players will talk about last minute scrapes and dodges after the game in a way which seems far more satisfying than a digital clock confirming that it wasn’t exactly three seconds and that actually everyone did lose. Nor does it seem to be a false threat because while players slow down their last few ticks most (if not all) are sporting enough to go “That’s it, we’re dead.” after a long tick rather than deciding that their last second can actually go on for minutes if need be.

The costs of removing the player counting mechanic are significant. The game needs the time limit to function, given infinite time it’s solvable and the cards which restrict communication and trade become irrelevant in the face of being able to calmly plan the perfect sequence of trades. Replacing it with an hourglass or timer isn’t practical for manufacturing reasons. Replacing it with an app might be doable, but I’ve already discussed the potential costs of games which require an app to play. I find myself increasingly tempted to leave the mechanic as is, with it testing well enough, and to rely on players to be sporting enough to give themselves a reasonable time limit (while being secretly pleased that they extend it slightly but not disproportionately under pressure in a way that makes for a better game). I’m still debating the extent to which designers can or should trust to the sportsmanship of their player base and how well observations of these facets in playtests will apply to play outside of a playtesting environment. 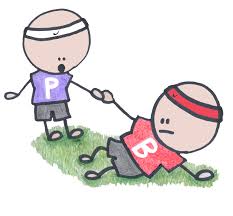 I wanted close by counteracting the earlier flippant comment about children being awful with an image showing the different types of helping behaviour that emerges pre-linguistic development – but it’s gone missing. There’s a scholarly article on it here.

3 thoughts on “Sportsmanship and Game Design”