Last night I was introduced to a series of games by Oink Games. I didn’t get on with all of them, but came away with the impression that for each of them there would be someone who did. One of the things that really stood out for me was the physical efficiency of these games. Take a look at one: 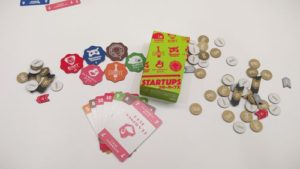 That might seem like quite a lot of counters to pile into a box atop that hand of cards – but that’s only because most of the cards aren’t pictured. The game has a 45 card deck, it’s just not pictured in the photo. The thing is practically a TARDIS.

This is interesting as a publisher and a designer. Lets talk publisher first. Generally I’ve launched games on Kickstarter, but have tried to get a few of them into distribution to some extent. One of the strange things about distribution in the UK is that big boxes sell games. There are people who very vocally hate opening a game to find the box is mostly insert and the game could’ve been fit into a box a fraction of the size, but they don’t reflect what the average gamer actually does when they walk into a game shop. Publishers, distributors and stores know it to the point that it’s part of the conversation. I’ve been flat out told “This is a great game, but it needs a bigger box to sell itself.” I’d always conceptualised this as one of the differences between Kickstarter games and traditional games – in the former creators ask themselves “How tightly can I pack this in? The smallest box is the easiest to ship box” and in the latter “How big can I make this before someone complains? Its essentially an advert and it needs to grab someone’s attention next to all of the other adverts.”

I’m told it’s characteristic of the Japanese market that “compact” is always a selling point and products developed their first are typically as small as they can be while remaining functional. I’ve never made a formal study of it or spoken to Japanese distributors so I’m not sure to what extent that it’s true – but whether related to a specific market or not there’s definitely a sense that this line of games has been built to be as physically compact as possible.

I think this sort of compactness is generally desirable. It’s less wasteful and it makes it easier to carry a game in a pocket rather than a bag. It is the sort of thing that’s good for everyone but disappears in a “tragedy of the commons” kind of a way once the market gets involved. I’d love to see some mechanism that made it easier for more publishers to go down this route successfully. 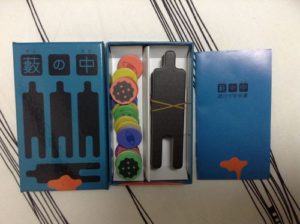 As a designer this sort of compactness is interesting because it requires the designer to get as much as possible out of their components. Despite this the components of these games never feel busy. Take In a Grove here, which is about identifying a murderer, as an example:

The round counters indicate how many guesses you have remaining before an incorrect. They also indicate if you’ve previously guessed correctly or incorrectly. They also indicate if you’ve ever been successfully bluffed by someone who’s (probably) deliberately made an incorrect guess in the hopes you’d copy them and lose. You can tell how well you’re doing by counting how many counters you have. They are coloured circles with two states.

This sort of design is testament to how much a designer can get out of a simple component, by making use of every attribute. A component can have almost no information on it, but can convey a wealth of different states by where it is on the table, its orientation, whether its face up or face down, whether counters are placed next to it, who’s looked at it.

This sort of game is a challenge and while the nature of the game I’m currently working on will not be to meet it, that doesn’t mean I can’t learn something from the design to take with me. 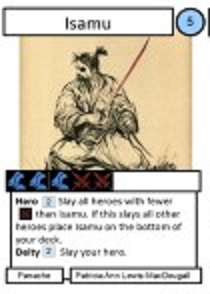 I’m once again working on Genesis, a game in which players are gods and pick three concepts to be the world they want to build. The theme initially carries well, players like being able to pronounce they are the god of Destruction, Chaos and Death or Drink, Fate and Love – but a theme can only carry a game so far, the gameplay needs to be solid too.

The game certainly has its fans, there are players who keep trying to get me to come up with new editions and push the game further, who can’t get enough plays. However it has a relatively huge attrition rate in the first game. People love it when they’ve played 3 or 4 times, but most people don’t enjoy the first game and a fair portion of them will walk away and never look back. That’s a huge problem since it is true of literally every game that more people play a first game than a second game. Essentially it’s unapproachable.

The main cause for this is that to some extent it’s a bluffing and prediction game, you simultaneously pick heroes and reveal them together. You want your hero to win so want to pick someone who’s a match for what you think your opponent is going to play.

If every card has dozens of icons and a custom special ability that’s got its own timing rules and is different to every other card that offers fantastic play and counterplay opportunities. It also makes the information density such that most new players are essentially playing the first few games almost entirely at random until they’ve had the opportunity to learn the deck.

The challenge is to streamline the components and rules to the point that a new player has some idea what a card does and how it’ll interact with things an opponent might play (and to have some grasp of what an opponent might play). However it is to do this without losing what makes the game special: That a god of a particular aspect will uniquely be able to access some asymmetrical power that others players can’t. 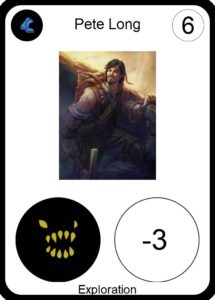 I’m on the way there, the core of the solution seems to be “Here are some standard icons which mean stuff. They do what you might expect. This guy makes people with bitey faces take -3. Highest number wins.” Then each type of god gets an extra icon that does something different, you tell everyone else what your three special icons are at the start of the game. Now cards more cleanly communicate what they do and players aren’t waiting until a card is played to find out what their opponents special trick is and can reasonably attempt to predict and counteract it.

I question whether I could go further. Characters have an icon and a number. Do we really *need* both? Or could abilities target based on the number? Or could the winner be determined by icon in a rock-paper-scissors way without the number?

Perhaps not. There’ll be a level of complexity that’s necessary for the different types of god to feel meaningful as what they are – love must feel like love, chaos must feel like chaos. On the other hand, perhaps it is possible. Maybe just one of those things can carry the weight of the rest of the game. I will probably end up reverting my changes but making the best games means exploring every avenue. I enjoyed last nights small box efficient games so I feel inspired to try.