The Magic: The Gathering design team design team uses a concept called the colour pie. This is the notion that each colour specialises in particular kinds of effects and so when designing cards those effects should primarily occur in the appropriate colour. Most magic players would score significantly above chance if asked to predict which colour a given card would be, just from its mechanical effects. 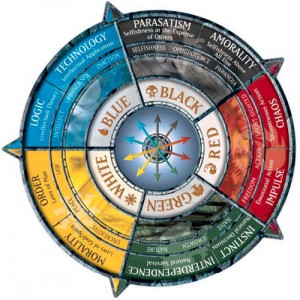 This has some really nice attributes, both in terms of theme and mechanics. Thematically it allows a group of effects to be tied together in a way that makes the divisions between them feel decent rather than arbitrary. Simply saying “These cards are marked such that you can only put them with other cards of the same type or risk being unable to play them” would seem odd but saying “These are the fire cards, you need fire stuff to play them, if you have other types of cards you’ll need other stuff to play the,” feels much nicer. Mechanically they’re the same, but a feeling of consistency can make mechanics chosen for their gameplay effects feel strongly thematic.

Mechanically this effect grouping also has merits. This makes games easier to learn but also opens up design opportunities. “Being able to access something from outside of its section” becomes a meaningful effect, permitting designs of effects that might be strictly worse than others but that appear in sections that normally wouldn’t have them. It also makes “Being resistant or immune to things from a particular section” a more meaningful construct. Of course it’s great to resist some portion of things, but when an effect becomes “resistant to stuff from the section that counters spells” you have the basis of counter play strategies that allow you to prepare for the sorts of opponents who present the greatest difficulties.

Doing this sort of sectioning elegantly is a challenge, if each section has totally disparate mechanisms then the complexity of the game will skyrocket obliging players to learn a whole set of mechanisms. It’s at its most effective when different sections can access different parts of the same mechanism – for instance if there’s a general rule for increasing or decreasing strength and one section is good at large temporary increases while another does small permanent decreases and so on. 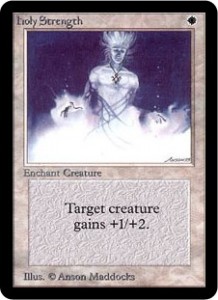 This approach isn’t unique to collectible card games, it can also used to create a feeling of the differences between factions in regular hobby board games. Consider a stand alone game like Blood Bowl: Team Manager, the general rules are the same for all factions and all factions *can* access all mechanics, but their prevalence in different factions helps to determine the feel of those factions mechanically and thematically. The elves have more passing and dodging while chaos have more tackling and fouling.

It can also be used to create a sense of unity in what otherwise might be an game consisting of entirely disparate effects. Consider something like Smash Up in which every card has a unique ability, such a game could easily risk becoming a bland mess as factions lack unique identities in a way that takes the savour out of combining them. Instead performs a similar sectioning off of mechanics giving factions access to particular things, but while making sure that they fit within the same framework of general rules in a way that playing with a different combination of decks doesn’t oblige you to learn a new game. Taking ghosts and suddenly getting bonuses for a small hand size might require you to learn a new strategy, but the fundamentals of drawing and discarding cards and gaining situational bonuses from counting things all emerge from the possibility space generated by the general game play.

I’m trying to draw on this sort of aspect for Nightmare, while also using it to solve another problem (the essence of strategy). I like the notion of players being able to tailor their game by deciding which sets of nightmares to face and therefore which mechanics will be in a particular game, aiming to add some variety to the game without increasing its complexity. There are also controversial mechanics in the game that some players absolutely love to bits and others hate with the burning passion of a thousand suns.

Mostly I’m thinking about singing and physical contact but there are plenty of examples of mechanics of this type. Some players really hate them to the point that they won’t play a game that includes them, others have been waiting for the excuse to pretend to be in a Broadway musical and are delighted when the opportunity arises. Generally these are reserved for party games in which the audience is skewed towards those who love them, but merging them into a meatier game allows some unique concoctions of concepts that aren’t usually brought together.

The danger is that the audience for more challenging games contains more people who hate this sort of effect, so in general it’s better to exclude it and be sure not to alienate anyone who might love the game. However sectioning it off so that the mechanic is associated with a particular set of cards makes it possible for players to choose whether to include or exclude it based on the preferences of the group that they’re with.

The present Escape the Nightmare rulebook contains a little table indicating which sets of cards have which aspects to make it easy for players to do just that. Blind playtester feedback is still rolling in and so far it appears to be working, with players who don’t like particular aspects ignoring them but those who do enjoying them, perhaps more so for their relative scarcity in games that also provide more of a challenge.

Breaking your mechanics into segments and sectioning them off along thematic lines can enrich your theme and mechanics by bringing consistency and by making variety fresh rather than arbitrary. It’s not a solution that’ll suit every game, but serves as a tool to bear in mind for the right opportunities.

Escape the Nightmare now has a BGG page. What should I add to it?
For an essay disguised as a comic about scarcity, try this.