I wanted to update a few people on my progress on the Scandinavia and the World game, but realised it’d be easier if I could embed pictures of prototype cards into the email and eventually came to the conclusion that I’d do well to write a blog post instead and direct interested parties to that. If you’re reading this as someone who generally enjoys my thoughts on game design, welcome, I hope you enjoy any insight this offers into the process – but please be aware that this post isn’t really intended to be illustrative in the way that the others are.

I’ve been working on trying to generate a SatW game for a few months now, it’s gone through plenty of editions. Without any fuss, here they are:

Version One: Smash Down

Basics: There’s a popular game called Smash Up in which players shuffle two decks of things together and duke it out to win territory. You might play as Robot Vikings or Ninja Cats or whatever. The first SatW game I tried was based on shuffling cards associated with several countries together and racing to be the first to get rid of them all. The idea was that SatW fans would get a kick out of combining countries they want to see combined and gamers would enjoy the challenge of reversing an existing genre (deck debuilding if you will). 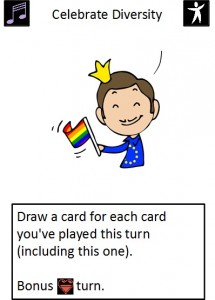 Test Results: Testing results for this game were pretty alright. Testers were starting to enjoy it and with further development this could be a publishable game.

Verdict: Abandoned for publishing reasons. Ultimately the requirement to have several cards for each nation severely limited the number of countries that could be represented, which makes it a poor demonstration of SatWs potential. Might be worth holding onto the mechanics in a future prototype with some other theme.

Basics: The nations want to compete but can’t agree on what the competition should be. As a compromise everyone gets to choose the content of one round. The game is played by having a hand of nations (your “team”) and challenges are drawn from a deck representing various ways in which they might compete. Players put two competitors into each competition and win when they win enough competitions. The idea was that SatW fans would get a kick out of watching the nations trying to do bizaare things and gamers would enjoy the hand management of deciding who to play when and who to hold for the opportune moment. 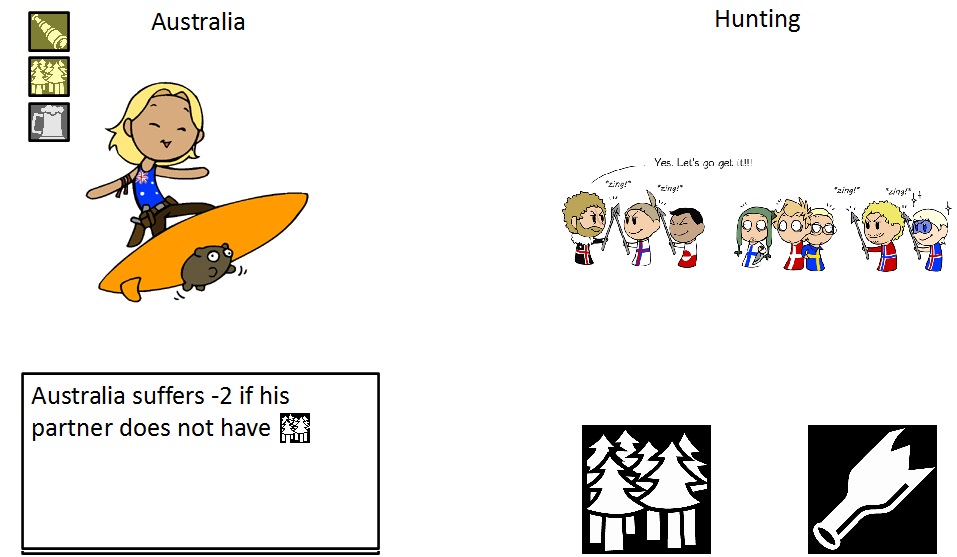 Test Results: Everyone hates this game. As a game the choice of which nation to enter into a particular competition is too basic, even non-gamers felt that the best moves were obvious and therefore boring. While the idea of particular characters getting entered into a wife carrying competition amused some players it was short lived, there’s no real hope of the theme carrying the game.

Basics: Based on a SatW comic about Sweden trying to organise his dinner party correctly, this game challenged players to get nations sitting around a table in an advantageous way. Each character gave the player powers to rearrange a circle of eight cards (around an imaginary table) and by moving them away from nations they hated and towards one they liked they could earn more characters and thus more abilities. Fans of the comic could enjoy interactions based on the character’s preferences and characterful abilities, fans of gaming could enjoy a brain teaser about how best to apply some quite variable and versatile abilities in an unusual domain.

Test Results: The brain teasing element was too much for this game. Being given the option to move eight characters one space in either direction produces 16 possible moves. A player might have 5 powers, so could have literally hundreds of options. Of these only a tiny minority are actually worth doing. Turns took ages as players looked for any move that would help them out of a huge set and everyone got bored waiting for everyone else to take a turn. Some of the SatW fans who tried it enjoyed some of the abilities given to different nations, which were often references to particular comics of behaviours, but it wasn’t enough to salvage the experience. Other problems include needing a relatively lengthy list of liked and disliked nations to be playable, which wouldn’t fit as words. Flags were a workable solution, but some flags look really really similar (stupid real world) which often frustrated some players.

Version Four: Lining up got a party!

Basis: In what may be the most British design decision in history, the previous game was modified into a game in which characters are queuing to get into a party. All players are already at the party and aiming to get the right people to join them as they walk through the door. As people join them they get powers that let them mess with the order of the queue and therefore who they get. The notion was to simplify the previous game while keeping some of the concepts that had worked – in particular the first person arriving each turn meant that nations could have a much smaller list of likes and dislikes tied to larger bonuses and penalties (rather than being a core part of the game that must happen every turn). 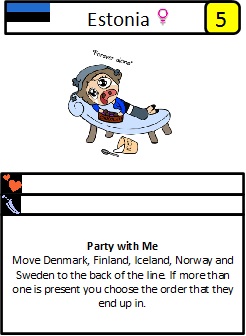 Test Results: Results for this game are pretty positive, though not the electrified excitement we saw for the likes of WA or EtN. It’d need to do better to be anyone’s favourite game, but people are willing (but not eager) to play it several times. With refinement it could be a good game, perhaps an excellent one.

Verdict: Still in active development, this could be the game! I worry about it from a publishing point of view though, with one card per character and few other elements to the game there’s not a lot of room for custom backer content and it’ll fall short of its intended component count (not necessarily a bad thing, but perhaps indicates some wasted potential). If it can be significantly improved it’ll be great, but I’m not sure if it doesn’t represent a local maxima. Further development and testing will answer these questions.

Basis: This was something of a love letter to the (apparently extensive) number of people shipping characters in SatW. The players take the role of a dating agency trying to help the countries find partners, they take cards from the nations they’re trying to pair up and play them in the hopes of them becoming closer. Mechanically the game relied upon discarding cards to power other cards, creating tough choices between which cards to play for effect and which cards to discard to power the other ones. 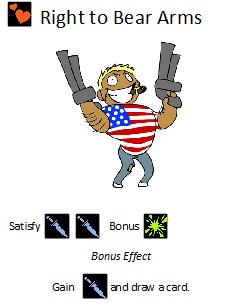 Test Results: Responses to this game were lukewarm. Nobody hated it, but nobody found it particularly interesting either. It may be that the theme and mechanics didn’t mesh particularly well or that the theme didn’t interest the majority of people. It also shares some of the issues that version  one has as a result of needing several cards to represent each nation.

Basis: The players are at a ball with the nations, trying to invite a few back to their place once it’s over. Their goal is to get a group that’d be fun to be with, rather than a group that’ll immediately start stabbing each other. The complication is that everyone is in masks, so they don’t know who’s who. Thematically it plays on the relationships between the characters, mechanically it’s a hidden information game about deducing where nations helpful to you are hiding while trying to trick your opponent into choosing incorrectly. 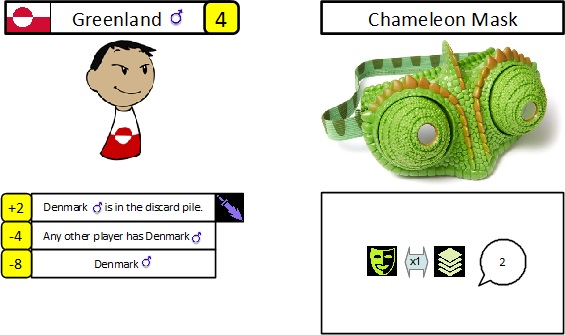 Test Results: Pretty positive. Being able to dedicate an entire card to just scoring often means that people who aren’t fans of SatW are getting something out of the theme. A single penalty doesn’t cover the depths of Greenland’s feelings about Denmark, but the combination of three make it quite accessible. Gameplay wise people initially complained that the game was slow due to people taking a lot of time to read all of the masks, but switching to an approach with more iconography is helping. Again it’s not doing as well as any of our published games, but people are up for more games of it as it develops.

Verdict: Still in active development. It’s behind #4 in terms of playtester response at the moment, but it may have more potential. This seems odd to say, but there’s more wrong with it. Improving #4 is hard because there’s not much to fix, whereas this game is received almost as well and the room for improvement is more apparent. The masks deck also gives room for a bit more creativity too, it lets us have things like “Beer demon mask” to reference parts of the comic that don’t make good characters as well as playing with other ideas. The artist might have some fun with it too, since while I’m just using mask images pulled from google images it’s not hard to imagine the SatW characters doing hijinks appropriate to their mask (Estonia in the chameleon mask sitting with the nordics for instance). High hopes for this one, if I can solve some information issues.

Basis: This combines the best aspects of versions two and five. The idea is that players have a pile of nations that they pair up to complete challenges and that these pairs give the players special abilities that they can use throughout the rest of the game. Looking to capitalise on SatWs themes of competition, some fans inclinations to try to put particular nations together and a mechanically cool idea of building special abilities from parts. 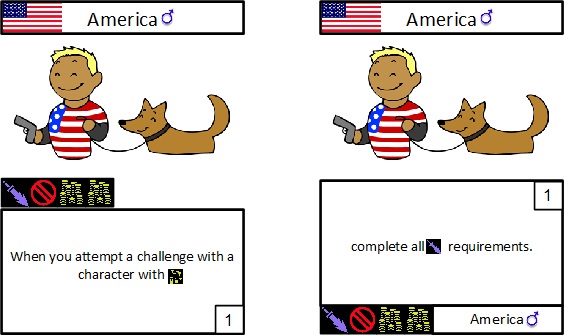 Test Results: This game hasn’t hit playtesting yet, it’s stalled in the card design phase. Creating ability fragments that can make interesting abilities but don’t create infinite loops is harder than anticipated. It’s also thematically hard to assign four “competence” icons to each character when some are only featured for one comic. There are also issues around mechanics/thematic mixes for the icons, making the combinations come up usefully relies on certain things appearing a lot but there are too many things that aren’t shared by enough characters. The double sided cards are necessary to ensure that I don’t require certain characters to be matched (so that, for instance, you don’t wind up with two preconditions) but create some ergonomics problems – imagine how much a card game might slow down if someone insisted on consulting the back of each card before playing. There are also shared traits that I’m not wild about writing challenges for: What competition do you win by being the most intolerant that’d be fun to play with?

Verdict: Shelved for now, though there are promising things about this idea so if I have a brainwave I might come back to it.

Phew! So that’s what I’ve been doing since December. There are two games in active development and a third that’s a couple of good ideas from going back into development. It’ll be desirable to stop exploring options and to pick one to develop into the full game at some point in the future, we’re not there yet but I want to stop expanding the list by the end of the month, to winnow it down to 2-3 tightly defined choices the month afterwards and to be ready to declare exactly what we’re doing and how it’s going to work by the end of March.

Once that’s done we can start on the art for the project as well as building the Kickstarter page and doing things to build some buzz for the campaign. I’m perhaps thinking a little bit far ahead at this point, predictions more than a week or two out tend to be horrendously unreliable and this project is a big deal. I don’t want to get something wrong by rushing it, but at the same time it’s important to keep track of the big picture so it doesn’t bog down in minutiae.