“Games are a series of meaningful choices.” – Sid Meier

Today I’d like to think about games that give a player a card (or other component) and the opportunity to play it in two qualitatively different ways. Under what circumstances is this a strong mechanic? Where does it fail to carry its weight? 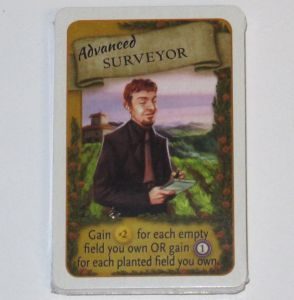 The most direct implementation of this is simply to have a card that explicitly offers a player two (or more) options. This is a very powerful approach as it allows for extreme differences of kind between the two options, in which they could bear no resemblance to each other or even other mechanics in the game, enabling a choice that obliges a player to think in a new way. However the downside to this is that the abilities must both be described on the card which means that they either have to be simple or they risk turning the card into a wall of text.

The example above is from Viticulture (Though I think it is from the Tuscany expansion) and I’ve picked it because it shows something nice about how this mechanic can be used. This card offers a bonus for each empty field or a bonus for each non-empty field. At the moment that the card is played there’s unlikely to be a meaningful choice between these two things – in most game states the best choice will be pretty obvious.

The meaningful choice that it creates actually occurs before the moment it is played. In this instance the choice offered on the card ensures that it stays relevant at all stages of the game, so at any given time when considering your hand and deciding what to play it’s a viable option. If all of the cards in your hand are viable options,  “which card to play” is an extremely meaningful choice. I feel that this is a neat reminder to look beyond the obvious for why something works or where a solution might be found. It tickles me that a card offers two options that will often fall short of producing a real choice but that this substantially improves he choices the game has to offer.

Another option is to take an approach similar to Race for the Galaxy. In this game a card can be played for its face effect or can be discarded as a resource (to power a different card). This generates a lot of meaningful choices as not only can each card have a lot of detail on what it does, but it also involves closing off a greater number of equally detailed options. If playing a card requires the discarding of two others and you have five cards then there are 12 times as many possible choices as you’d have under a simple “play one card” model.

The weakness of this kind of approach is that it requires the alternative use of the card to be the same for all cards. That alternative use needs to be attractive enough that a player would regularly consider it as an alternative to the more unique effects that the card face has to offer. It seems to be strongest where the alternative use is not merely something that is useful, but that is absolutely necessary. RtfGs example of “discard cards to power other cards” is great.

Scandinavia and the World runs into the opposite problem here – the discard mechanic is critical, but the face powers aren’t different enough. They all boil down to “Get a point towards winning the game if you have the right character.” As a result the tense choices do not emerge. This put me in a tight spot as a designer in that I’d like to add a little complexity to the items in order to add a lot of depth to the game in a trade-off that I’d usually take without blinking. However this game is intended as much for fans of the comic who aren’t hugely into games as it is for fans of games who aren’t hugely into the comic so the line for the ideal depth-complexity trade off is shifted somewhat compared to a normal game. 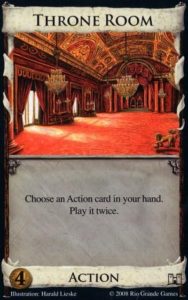 The final type of choice on play is the context dependent choice. I’ve used the example of the Throne Room from Dominion because it was an image that I could find easily – but as we get into discussing the strengths and weaknesses of this approach you’ll see that it’s actually not the strongest implementation.

With this method a card nominally has one effect and can be played in only one way, but the effect is so context dependent that it’s a way to include a great many very different effects on a single card. Cards that do this tend to have meta-effects such as rerolling dice or adding to all numeric variables on another card or something like that.

The strength of this approach is that it allows for a card to have many many many possible effects, rather than just two. This creates a broader decision tree and hopefully in doing so produces a more meaningful decision. The limitation is that it doesn’t matter how many contexts that there “might be” what really matters is how many contexts that there are. So throne room often fails to provoke such a choice because it is often drawn with a very limited number of other action cards and which card to pair it with is often obvious (that is not to say that it’s not a great card to include in the game in other respects, just that it does not produce this particular effect). 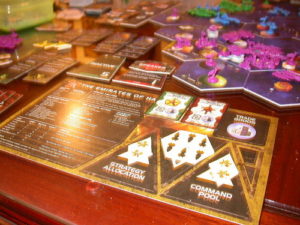 Having discussed that there might be more than two choices it seems time to render the title “one card, two choices” a complete lie by pointing out that the card is optional. Any game component can be made to serve double duty and produce meaningful choices by having the specific use to which it is put as a decision for the player.

Here we see a Twilight Imperium player deciding that they don’t need the strategy allocation to take many secondary actions and that they only fancy moving a couple of times in exchange for being permitted a really big maximum fleet size. So if you are using a counter, model, dice or anything else as part of your game, there’s always the option to have it double as a completely different thing.

Happy or Challenging or Exciting Gaming!