A brief apology for missing last week’s update – my spine failed while I was swimming and made a semi-convincing attempt to drown me (but it’ll have to try harder than that!) I’ll write a bonus post next week to make up for it 🙂

I recently hired a graphic designer to put together some icons for the upcoming Genesis game. I told them that I needed icons for a number of different domains, which would be things gods had power over. So a water icon for the god of water, a death icon for the god of death and so on. Specified the size of the icon, showed the graphic design it was going to slot into, provided some hex codes for the colour palette I wanted to use and left it with him. Here’s the first draft that got sent to me for approval: 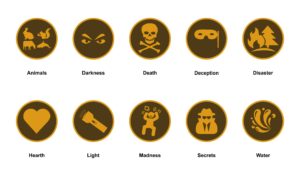 Now there are various things in these that have room for improvement one way or another but one stuck out as not only something I didn’t want but something I really ought to have specified that I didn’t want in advance.

The “light” icon is an electric torch that’d be super anachronistic in my swords and sorcery era game about gods.

Fortunately I am a known idiot who’d not been through this process before with a freelancer (Previously icons have been designed by someone deeply involved in the project) and therefore hired someone who advertised “Infinite revisions” as part of the fee. I brought up the problem about light and asked if he could do me a lower tech light source and he was fine with that, which got us to this: 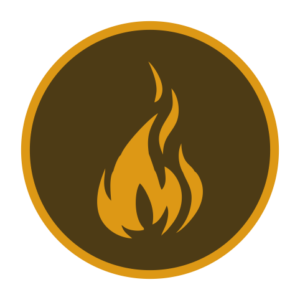 Now that’s all well and good. There are plenty of games in which that icon could easily mean “light”, I’m pretty sure I’ve played games that have little flame tokens to indicate lit rooms.

The only problem is that it’s not this one! The reason being that we also have a god of fire (Who wasn’t part of the icons I was looking for in this set). A little more refinement got us to this: 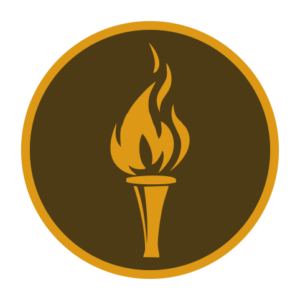 Now that works okay. It’s being a light source as much as it’s being fire and if you had both of the above icons on the table you could tell which is which. In some games it might be confusing – say in wizard’s academy where a space might have half a dozen small tokens and you need to tell at a glance what’s there – but in this game it ought to be sufficient.

The chances are that I’m using none of these icons in the final game. I’ve got people playtesting the game at the moment and we might be revising some graphic design choices which in turn means revisiting the palette and needing new icons. I knew that before I started – the point of this was to find a freelancer I’d be happy to work with, get used to the system and make my mistakes on a trial run that doesn’t matter so much.

Knowing What You Don’t Want

I think that the main problem I’ve had here was this: I didn’t think enough about what I didn’t want. I knew that I wanted an icon for the god of light, so that you could tell when a champion of light was using the god’s power. I knew it should evoke “light” as a concept, it’s rough size and so on.

What I didn’t know was that I didn’t want it to be outside of the scope of other things I’d set for the game (Such as era) and I didn’t want it to get confused with other domains that are in the game. “Fire” was the domain that caused a problem here, but I’d also have done well to warn the designer “There is a god of the sun, so don’t just do a sun”

This applies to other aspects of game design too. You can write a rule going “I know I want players to be able to draw more cards” without explicitly considering “I don’t want my card draw rule to permit an infinite loop” Or the way you can codify a rule might be “I want players to do X” without considering “Could someone who was minded to (For advantage or habit) misinterpret this as support for doing Y”

Become the master of your undesires.