I saw a post on BGG today with a new user asking “How big should a deck of cards be and how many cards of each type should go into it?” This has correctly been answered with “It depends” – but what does it depend on and how do those dependencies work? Let’s dig in! 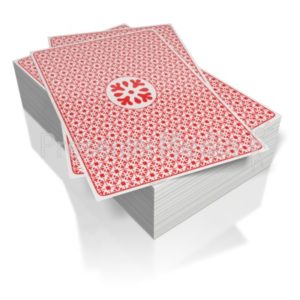 Let’s start with the size of the deck: How quickly are we drawing cards and what happens when the deck runs out?

If the game is going to end when the deck runs out then we can use the intended length of the game and the draw rate to derive the ideal deck size. If a deck running out triggers some important event (e.g. The overlord gaining threat when his deck is reshuffled in Descent) then the desired frequency of that event becomes something we can use. If the discard pile is simply going to be reshuffled then we need to consider other factors.

A hard minimum on a deck size is the number of cards that will simultaneously be out in the most extreme situation. If your game has five players and each has a five card hand and there are ten upgrades that’d increase a players hand size by one then your deck can’t be smaller than 5×5+10 = 25 cards. It sounds silly, but I’ve been at playtests where a prototype has ground to a halt because a deck that was still in testing ran out of cards in an infinite loop of shuffling an empty discard pile into a deck in a never ending attempt to draw one more card.

Another factor is how predictable you’d like a game to be. There’s an interesting comparison here between Magic and Hearthstone (Yes I know, the latter is a computer game, but it’s a computer game of a board game so we can analyse it). In Magic you have a sixty card deck with no more than four of each card. In Hearthstone you have a thirty card deck with no more than two of each card. Initially the chance of drawing a maximally included card is the same in both games (1 in 15) but this changes over time. A smaller deck creates a more consistent and predictable game, because while the average number of draws needed to achieve something remains relatively constant, the probability of this game being similar to the average is higher. If you need an intuitive illustration of this consider the following: How many copies of the target card will you see in the first 30 draws of a Hearthstone game compared to the first 30 turns of a Magic game?

However there is a factor tensioning in the opposite direction: How fine a probability do you want to be able to model? If you’ve got something that you want to have a 1 in 10 chance of happening, you’re going to struggle if your deck has less than ten cards. It’s all well and good to suggest that 2 cards a in 30 card Hearthstone deck is the same as 4 in a 60 card Magic deck – but what’s the Hearthstone equivalent of 1 card in a Magic deck? Half a card? How are you going to do that? 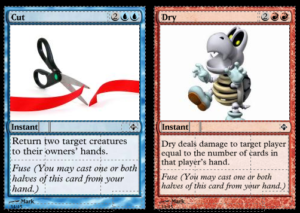 Another factor regarding deck size is how probable you want a particular combo to be. This sounds like it matters most in something like Magic, but it’s a much bigger impact on say Fluxx – in which drawing an objective and the card(s) needed to complete that objective together can all but end the game. Of course here you need to think carefully about what constitutes a combo – there’s a difference between the probability of drawing “All you need is love” and “love” and the probability of drawing “Any card that lets you draw more cards” with “Any card that lets you play more cards”.

Finally – how impactful is each card? If every card drawn has a tremendous impact then a deck doesn’t need to be particularly big. Consider the objective cards in Kingdom Builder. They completely redefine the game, causing a player to adopt an entirely new strategy to deal with them. As such very few are drawn per game (Three at the beginning) and the overall quantity needed is not particularly great Conversely, if each card isn’t individually doing much you’ll need a larger deck and more draws for it to have the desirable aggregate impact on the game.

Moving on to the multiples question – suppose we’ve fixed our deck size at 50 – how many do we want of each card?

Well again start with what happens when a type runs out – decide how desirable that is and set the quantity accordingly. Note that this can be a direct or indirect effect. So in something like Dominion the game explicitly ends when three stacks are empty, so the size of a stack needs to be set carefully to be in balance with the desired end of the game. However it can also happen indirectly – I’ve been playing a lot of Steam Works lately and there are some noticeable soft effects when the deck runs out of something important like Upgraders or Automations. Knowing “They’re both gone, besides the one on the table this will be the other players only choice for an extra action.” affects how the second Automation tile is played. Watching your playtesters for reactions as particular things come out and deciding when you’d like that reaction to occur can help to set the number of instances of something.

An extremely obvious measure is how many times you’d like a thing to happen. If you’re running through a deck once then that’s a 1:1 mapping with the number of copies of that card. If you’re going to reshuffle the discard pile then you need to do some maths on the average number of turns the game is intended to last – but ultimately you can set a relationship of “This should happen X times per game” if you so choose.

A third important factor is to consider the consequence of drawing multiples of the same card (either consecutively or as part of the same hand). 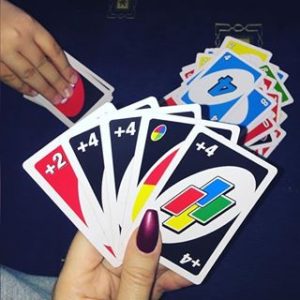 This can be desirable or undesirable from the perspective of the player, depending on the game being played, but that’s not as relevant as you might suspect. The real question is whether it’s desirable or undesirable from the perspective of making he game fun. Does a repetition generate interesting new strategies or make the game stale? Does it generate a heavy skew in who’s likely to win and does the game have mechanisms to support this? How does it feel to draw a hand like this and is that a feeling you want people to experience during your game?

Finally, what relative probabilities do you want out of your design? Depending on the game you might want a degree of “filler” if your deck is essentially a way of going “There is a chance of notable thing happening and it will eventually happen”. Something like Exploding Kittens takes this to extremes, with the win card (well the lose card, but one person’s loss is another persons win), being the notable event and relatively large portions of duplicate cards being used to space those out.

If you’re considering publishing, then the constraints that provides should also be considered. Bigger decks cost more money (per game) and more cards with unique art costs more money (once only). It’s not good to sabotage the quality of a game in pursuit of publication, but sometimes the answer will be “It doesn’t matter between X and Y” in which case you should usually go for X. 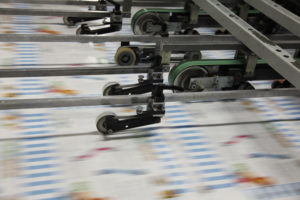 With all of these questions and requirements (and more considerations I’ve not covered – it’s a super broad question!) there are bound to be contradictions. Where two requirements are in opposition the game designer has only one option left: Compromise!

Wait no – I mean Shenanigans!

Suppose you’ve got 4 events that you want to happen 25% of the time but with deck reshuffling and a chance for the same event to happen three times in a row – what’s the minimum deck size?

If you answered 12 you forgot that the last card before a reshuffle might be the first card after it, you should’ve answered 8. If you answered 8 you forgot that the end of a deck doesn’t *have* to be the only time you reshuffle. You can get away with 5 – one of each card and a fifth card saying “Reshuffle the deck and draw again”. I think a lot of Game of Thrones players overlook how great that winter is coming card is as something thematic that also allows some probability manipulations that’d usually require a larger deck.

Suppose you’ve got a 60 card deck that contains Key Card ™. You want the odds to favour it coming up in the first 20 cards, but you can’t have it happen more than once so don’t want to include multiple copies. Do you have a solution that doesn’t mean compromising on the deck size you’ve picked for perfectly legitimate reasons?

Yeah! Of course you do, we talked a few weeks ago about how deck search affects card probabilities. You can throw in a few “Search the deck for any card” cards, which let Key Card ™ come up earlier but don’t act as duplicates. Other solutions including having Key Card ™ have a different effect based on how many Key Card ™s are in the discard pile and including multiples to make sure Key Effect ™ happens roughly when it’s needed without Key Card ™ having to be unique.

I have not actually trademarked the phrase Key Card ™ and have no idea where this compulsion has came from. 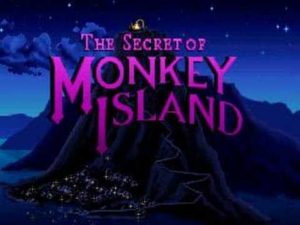 Another trick is to split or combine cards. In 404: Law Not Found action cards can each be played for one of two effects. This was actually a dodge to make hand sizes more manageable while still offering a reasonable number of options – but it would serve just as well as a means to manipulate towards an intended deck size. Conversely the effects of several cards can sometimes be combined as in Blackbeard which uses the same cards to determine what sort of ship you find, the consequences of losing a duel, if your crew feel like a party, what sort of random event is coming up and more depending on the context in which they’re drawn.

So – that’s my whistle stop tour of things which impact on deck size – and tricks to nudge the edges of those limitations when they’re inconvenient. With such a broad subject matter I couldn’t really hope to cover it all in one blog post, but hopefully it’s a good start position for thinking on the subject 🙂