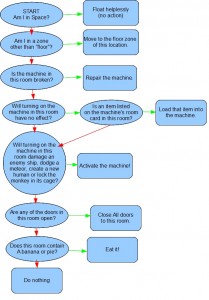 This is a prototype flowchart for human behaviour in 404: Law Not Found. When I switched to this method of expressing this rule I discovered two things: Firstly for 90% of people flowcharts are a much clearer way of demonstrating rules that are dramatically less confusing than the same rules expressed in prose. Secondly 10% of people don’t know how to read a flowchart and are utterly bamboozled by the presence of one to the point of being unable to play.

There’s a lot of garbage psychology about different learning styles and what colour a peron’s brain is, much of which isn’t supported by the evidence and should be thrown out on sight. However there’s definitely an underlying truth in the notion that people have different styles for learning things and as game designers (or even as gamers introducing new players to our favourite games) we could do more to facilitate that.

It is true that some statements are clearer than others, but it’s a trap to fall into a way of thinking that this means that there is one perfect expression of the rules and all explanations can be judged by their deviation from that. Personally I *hate* any explanation that gives me an example before the general rule – or worse an example instead of the general rule. Some players will cheerfully pick up a set of rules given an explanation that consists of nothing but examples and the expectation that they can derive the rules from them.

In my previous games I’ve generally decided to find a format that was comprehended by the highest percentage of players and express the rules in that way. I’m no longer certain that this was the best approach. Presently I’m writing an errata for Wizard’s Academy and I notice that I’m spending as many words on “This is in the rulebook in a manner that is technically unambiguous but I get asked about it.” as I am on “This wasn’t in the rulebook and a genuine errata is required.” 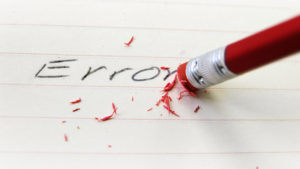 The solution to “No one way of expressing rules works for everyone” has to be to express rules in more than one way. There are plenty of games that do this already, increasingly games are coming with links to online videos for people who prefer a video explanation (and I’ve provided these for all of my games so far as part of preparing for Kickstarter) but we can go further than that.

Some rules explanations can co-exist happily. Adding a couple of pages to a rulebook is relatively cheap (pence per game) and spreading that space out over the course of the rules would be enough to put flowcharts or other visual representations of rules alongside the text version. That way a player can look at whichever version of a rule is right for them.

This is going to be of particular importance to my next 3DTotal project as it’s based on a webcomic and I want to make it accessible to people who’re webcomic fans but who don’t play many games. Bringing new people into the hobby is good for everyone – especially the new people. So having a dual rulebook (or rule sheet for this game I suppose, as it’s a simple one) which puts a graphical explanation alongside the prose that’ll let gamery gamers pick apart the detail where it matters will likely serve very well.

This is all hypothetical at the moment, but we’re in the process of putting a mostly graphical rulesheet together. Here’s a first draft:

It’s already getting some updates. For instance “does their ability” smacks of “me good English speaking”. The hands of cards could do with showing that they’re worth different amounts of money on the back. Still, once it’s finished I hope this’ll be a way to express rules that’ll really suit players and has space for a more traditional explanation on the back.

This is achievable in its entirety since the rules for this game are relatively straight forward (a consequence of the target players) but even for more complicated games there’d be room for explanations of this nature. Typically players don’t have problems with games as a whole so much as particular tricky bits of those games and those tend to be fairly identifiable in blind testing.

So whether we’re talking about videos, infographics, flow charts, prose (and all of the different ways of writing prose!) different players are going to latch on to different things, so there’s an argument for trying to squeeze more then one expression into a game. Plenty of games are already doing it and I feel like it might be a good idea for me to follow suit.