An exciting point during a game is the moment after each player has had some opportunity to make strategic choices and build up their position, but before a decisive conflict that will reveal which of the approaches that the players have taken will triumph. 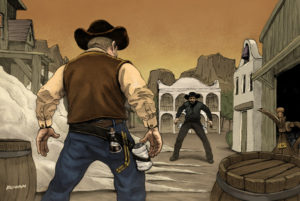 These moments don’t occur by accident. If a designer doesn’t consider their game the natural tendency is for the player with the advantage to push the conflict immediately while they’re sure that the situation still favours them. To create a tension between players getting ready to act it’s necessary for the designer to take steps to ensure that there’s a motivation for the standoff to persist, at least for a little while.

The design question boils down to “How do you have a game in which a player can ultimately initiate a conflict and emerge victorious, but will be unable to do so until they’ve manoeuvred themselves into a significant (rather than mild) advantage?”

Some games simply don’t care, their moments of tension and excitement aren’t vested in this moment, that’s fine. Those that do have a variety of different design decisions that let them capture this element in different ways. Today I’ll take about five approaches: Risk, Obfuscation, Defenders, Revelation and Asymptotes.

I really wanted to use Risk as my example for this one, but it’s actually relatively weak in this regard (when we get to defenders in a minute you’ll see why). So I’ll go with Prophecy – in this game you’re wondering around the board, killing monsters to grab equipment and skills. When you think you’re ready, you ascend to the astral realms to challenge guardians and steal their legendary items, the first player to get four of these items wins.

The standoff occurs when a player is powerful enough that they *could* defeat a guardian but not powerful enough that they definitely would. Combat is determined by a die roll so there is an element of uncertainty in how something will play out. Coupled with relatively severe penalties for failure (If you manage to get your character killed you start again from the very beginning) it creates a situation in which a player might have a slight advantage, but would be reluctant to progress to the final confrontation without doing more to shore up their position.

In Ninja one player is using hidden movement to infiltrate a stronghold while the other openly moves a great many guards to try to stop them. At some moment the ninja must attempt to complete their objective, but in doing so reveals something about their location (a space they passed through this turn) to the guard player.

The standoff occurs while the players jockey to find the right position to make their move from. The ninja doesn’t know exactly where in the stronghold their targets are and so has incomplete information, similarly the guards have no idea where the ninja is. In the moments leading up to the burst of activity provoked by the ninja’s first search one player might objectively have a clear advantage, but the game’s information is somewhat obscured making the right moment to strike more ambiguous. 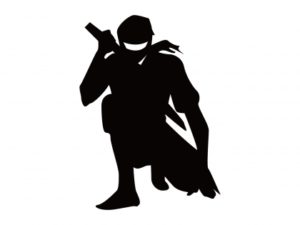 How many games have a rule along the lines of “Highest score wins, defender wins in a tie”? The effect of this rule is to create a margin of power within which neither player can attack – as they’re sufficiently evenly matched that the defender’s advantage will be sufficient to swing the conflict. I’m going to use Magic as an example here because it’s defender advantage mechanic is less obvious than in some other games and has some neat emergent properties.

In Magic both players can summon creatures. When creatures fight any combatant with a strength equal to or higher than the other creatures toughness kills it – otherwise they do nothing at all. There is no “defender wins in ties” the creatures kill each other if they’re both capable. The defenders advantage instead occurs implicitly because the defender gets to choose whether their creatures intercept an attacker or not, which in turn decides which fight takes place. This creates all sorts of stand off situations. Suppose one player has a 5/1 creature and the other has a 1/1 – a clear disparity in power. If the player with the better creature attacks it will be blocked and killed, trading its life for a much weaker creature – but if the player with the weaker creature attacks it will be ignored and deal minor damage to the player while leaving them open to a counter attack from a much harder hitting creature.

Traitor games come by this idea from a different direction. In The Resistance players select a group to go on missions – the members of that group then play success or failure cards to determine the outcome of the mission. The traitor team wants 3 missions to fail, the loyal team wants 3 to succeed. If a mission results in failure, it is obvious that at least one person in that group was a traitor (the loyal team isn’t even allowed to play failure cards).

The standoff occurs because the traitor needs to determine when to throw in a sabotage card, in this case the situation is known and the outcome is predictable – but what the other players will do with the information that you reveal to them is the unknown factor. Where a game based on obfuscation may create a standoff based on players being uncertain as to the state of the game, a social deduction game can create the same effected based on players being uncertain as to how the social dynamics of the group will play out. 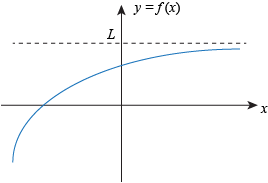 What if your game is cast from the euro mould and doesn’t allow direct conflict? As is always the case with euro games, math has you covered. By which I mean thinly stretched metaphors using slightly misinterpreted mathematics. In Dominion players purchase cards which can enable them to purchase more cards or provide victory points necessary to win the game. However cards that provide victory points enter that players deck as “dead cards” and make it harder to purchase further victory points.

In this sort of system a standoff exists because there is a band between the point at which a player first could start taking decisive actions towards ending the game and the point at which its desirable to do so. By ensuring that progress towards victory slows the engine making that progress a tension is created between a desire to make progress now and to hold off starting the end game for a little while. While there is no direct confrontation the choices of the other player(s) factor heavily into when launching into the final sprint is a wise choice.

There are many more ways in which a game can create interesting stand offs, but the key ingredients to all of them are these:

Not every game needs this element, but games that use it well can produce memorable experiences. Happy gaming and don’t blink first.