Today’s topic: When should you put cock into a game.

There was probably a more delicate way to phrase that, but it’s been on my mind lately. I saw the SU&SD review for Kingdom Death Monster which brought it to mind lately and as some of the art comes in for the Scandinavia and the World game it’s becoming increasingly apparent that it’s a topic that’s going to come up. 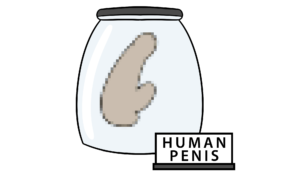 I’ve discussed adult content in the context of SatW before. I don’t want to retread the same old ground, but here I’d like to take a more general look at adult content in games to help to contextualise my thinking about my own work.

Adult content in board games basically comes in two flavours: Sex and violence. These topics are treated differently in different cultures and some cultures treat them very differently to each other. Since I’m writing in English the chances are that the majority of people reading this are from places that hold to the “Children can see someone eviscerated and that’s pretty normal but boobies will ruin them forever” places.

There is a fundamental disadvantage to including this content in a game: The phrase “adult content” is literally defined by there being a group of people for whom it is not suitable. This means that including it makes your game not suitable for those people, which in turn limits your audience. We’ll get into the details of drawbacks later because it goes deeper than that – but first we need to establish why you’d even want to do it in the first place. 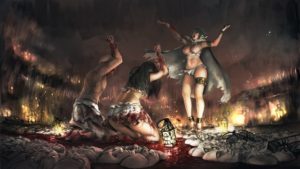 In some contexts one could make an argument for realism. I’ve talked before about how I feel about the realism excuse. Unless a game is almost absurdly simulationist then you ought to be twisting realism to suit your game, not the other way around. When faced with “realism” as a reason for including adult content my inclination would be to ask “Sure, but what’s the real reason?”

Landing the theme is another. Sex and violence are both extremely emotive concepts and images of the above offers an easy way to stimulate particular kinds of emotional arousal. If a game strongly benefits from having players in a particular frame of mind and including adult content presents an efficient way to achieve that frame of mind then there may be cause to include it. Though in considering whether this benefit outweighs the cost one should compare the difference between this and the next most effective manner of being evocative, rather than comparing it to a theme-less version of the game.

A game may also be wishing to be an object of arousal directly. This makes the most sense in the context of an adult game, that exists with a design goal of helping guide players towards sexual creativity that they might not have achieved without the game. In this instance the game is already aiming at an adult audience and so the drawbacks are minimised. However the goal of such a game would be to have someone be aroused by the other player (or players) so there’s an extent to which directly arousing content might distract from its intent.

Cynically it’s also used as a marketing exercise. There’s a lot of debate about the extent to which sex and violence sells a game (or any other product for that matter) particularly if you aim your depictions squarely at only half of your audience, as is so unfortunately common. However there have been times that it’s been undeniably effective and I can see why there’d be a urge to capture that.

Finally it’s something that can be used to key into other ideas. We have a *lot* of associations with adult imagery and these can be employed in various ways. Perhaps one of the most common is in humour: We laugh about the things that scare us and a lot of people seem to be afraid of violence and outright terrified of sex. 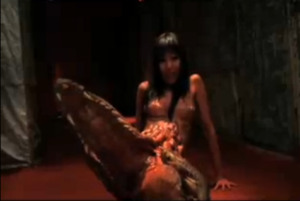 So, you’ve had an honest look at your game and decided that yes, for whatever reason, adult content is desirable. You can see the benefits, the next step is to consider whether they outweigh the costs.

The obvious cost is in who is excluded from your game by the choice. This isn’t limited to people who are too young for the game (some of whom will probably find a way to engage with it anyway) but the group of people who might have otherwise enjoyed your game, but find this material’s inclusion to be distasteful. This number will vary by why they care and the manner in which the material is included. There is a difference between a mockingly blurred cartoon penis and a double page rules spread the designer clearly expects someone to jerk off to – but both are going to turn away some proportion of your audience. Is it worth the loss?

Moving another degree out, some game stores won’t carry your game if it has adult content. Which means in turn some publishers or distributors won’t either. It’s worth considering what you’re doing to your circulation.

There are also social costs to consider. I won’t harp on about it, but I’ve made the argument before that games are media and that as media creators game designer should be conscious about how their choices affect culture. Where you stand on that depends upon your views. Personally I think that we should be making games that aren’t excluding people on the basis of their gender, sexuality or race, but I also think that we’d benefit from engaging with subjects we find challenging and particularly with opening up about sex. That leaves me walking a fine line of wanting to include this material (where appropriate and beneficial) but without being voyeuristic or relying on titillation to sell games. I’m sure your opinions will differ and I’m not here to change your mind about what’s important in the world – but I wanted to ask you to consider what is important to you and how you would like your game to tie into that. 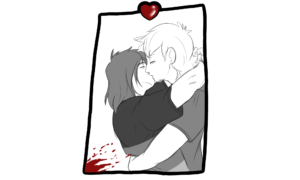 Finally you need to consider (and minimise) unintended harm. I wanted Escape the Nightmare to do it’s best to portray nightmares, counting it as a personal victory when I hear a player has had a real life nightmare about the game. That sounds like a terrible thing, but fans of the horror genre are delighted by that, the game is serving its purpose and the social contract under which it was bought.

However no matter what you do, someone who the game isn’t designed to serve will find a way to come across it. I did everything I could to make that game be fair and forthright about its subject matter – there was a quadriplegic torso as the first image uploaded to the BGG page and the top one on the KS and our press releases. Yet still someone managed to start playing it without realising it had violent themes.

This made them unhappy.

The primary purpose of creating games is to bring joy, so it’s a notable failure every time a game makes someone sad for whatever reason. Failures of this nature are perhaps inevitable when dealing with volatile material, but they should be minimised to the greatest extent possible. 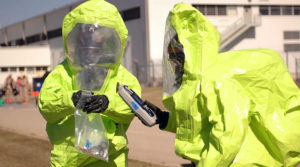 Which brings us to the climax of the post: How should adult material be handled in the context of your game?

Ultimately it depends on your goal. In a lot of cases the best approach is to not engage with it and skirt around the subject. If you do need to include it then making sure it’s for desirable reasons and minimising undesirable side effects is the way to go.

A few tricks to help with that:

What exactly are you going to depict? What could you do a better job by implying? Implications are convenient since a player’s imagination is likely at their level (whatever that is) so your game automatically becomes that if you do it subtly enough.

What other motivations might someone have for doing what you’re doing? Is it beneficial for you to do these as well? If you understand what else might be happening then taking steps to distance yourself from other positions, or to embrace them too and gain a double-dip of advantages will improve what you’re getting out of taking this step.

How are you going to telegraph your choice? If you’re going to do this thing, then it shouldn’t be a surprise to any of your players. It’s worth putting a bit of thought into how you’re going to make sure the right game gets to the right player.

Well, that’s all for this week and this year, the next 3DTotal game design post will be in 2017 – see you on the other side and have a fantastic Christmas 🙂