Let me start the week with a few housekeeping announcements:

1) I’m intending to have a look at how this blog works and see what could be updated. I’d love to combine the 3dtotalgames site and BGG site into one blog, but there are features of both I don’t want to give up. It’d also be good to have a bit more functionality (comment notifications etc.) if there’s anything you want please shout up this week.

2) Gamergate is still going on. It occurs me to that I hadn’t stated this formally before but, in the most diplomatic tone that seems appropriate to the issue: Fuck That Shit. Props to my brothers and sisters in the computer game design world fighting the good fight. It’s also a reminder to watch the culture that we encourage through our creations.

3) The first copy of my first game arrived recently and it looks amazing! It’s so exciting to see it rolling off the production line, there’s an unboxing video here, but for those of you who don’t like clicking on links left by strange people on the internet, here’s how it looks:

I’m so pleased with it 🙂 Anyway, I should probably write something about game design. Earlier today I was considering some of the rules for my next game, Wizard’s Academy. In this game you play as wizards who do not know any magic and by trial and error work out how to use spells to save the day (hopefully) without burning the building you’re in to the ground. A key mechanic is that the spells are represented by cards a subset of which is (semi) randomly placed facedown on a grid at the start of the game so players do not know which spells are in the game and which actions will result in which spells.

When a spell is cast it is flipped face up and takes effect, if the caster is a specialist in the spell’s school of magic or standing in the right room the spell is boosted and has a modified effect. It is these modified effects that I’m concerned about.

Currently most spells have two effects, the main effect and a secondary effect that modifies or overwrites the first when the spell is boosted. I’ve been contemplating whether it would be better to have the boost effect always be the same (something to the order of magnitude of “gain an extra action” in a game that permits players three actions per turn). This would reduce the complexity of the spells and of some situations in the game considerably. 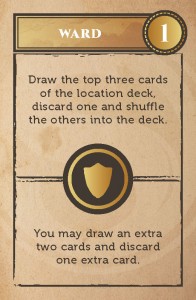 For cards like the one above in which the boosted effect is a slightly better version of the main effect this would probably be an improvement. However some of the boosted effects are a difference in kind rather than a difference in scale. That is to say that the boosted spell is capable of achieving something that the unboosted spell simply cannot do, rather than having the same effect at a greater magnitude. For instance an attack spell that when boosted can be used against a non-creature threat. 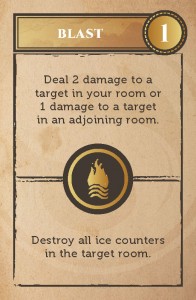 These produce several important effects in the game. The first is that they help to differentiate the characters, if boosting provides an extra action then it’s nice to have the appropriate character but isn’t worth any effort to make sure they get there (If you spend an action doing it then you’re worse off than if you haven’t tried). If boosting is necessary to deal with the particular problem then working out how to get the right character to the right place with the right resources becomes an extra challenge.

It also offers something to the spell randomisation. The spells are fixed in that there are always the minimum spells required to complete the objective and win the game somewhere in the deck, but that’s as far as it goes. If the spells you draw for a particular game do not happen to have any spell that removes fire then your group of wizards simply can’t remove fire. I find this adds a lot to the game because threats interact with each other (a flood puts out a fire, an imp can extinguish it with magic if they’ve stolen from a player etc.) so in situations like this players can scramble to use what resources they do have to direct the threats towards each other in helpful ways.

However it is a balancing act. Having one type of problem that the players cannot deal with is fun and requires some juggling to save the situation, having multiple problems of this sort could make the game disheartening and seemingly unwinnable. To an extent the fixed number of spells helps to address this, if spells are lacking for a particular problem there will be a great many spells for dealing with other issues as there are always the same number of helpful spells in each game. However a problem arises if players happen to set up a game that contains several spells that all do the same thing.

These differences in kind address this issue. If a spell is capable of doing two different things then drawing spells with overlap becomes less of a problem. Where a vanilla collection of spells that only deal damage could make for an unfun game, if they can be boosted differently to deal with non-creature (i.e. undamagable) threats then a clever group can juggle them successfully to deal with whatever situation they find themselves in.

The final issue I’ll raise here is something that’s been controversial in discussion with other designers, but has playtested very well so far. The differences in kind help to increase the volume of opportunities in the game, if a player has a choice to cast any one of 28 spells that could each have 2 effects or operate a dozen different room actions or use magic items or their character abilities then there are a lot of choices available to them.

This can be dangerous in creating information overload and an opportunity for analysis paralysis – but so far it has not played out that way. Individual actions tend to be straightforward, on average a player may have 3-4 options for how to expend a given action, well within most player’s capacity to make a decision. The opportunities exist on a more strategic level over a few turns, for instance “If you go to that room and grab that thing and share it, I can fix the deck so the fire won’t spread right and Lisa can use your glyph to put it out on her turn.” This creates a problem that’s more akin to a search problem in which players are continuously looking at their options to see what combination of spells, boosts, rooms and moves might help them and contributing ideas when they occur.

This is the lifeblood of a cooperative game. The answers need to avoid being obvious enough that a single competent player can start giving everyone orders about what to do. The solutions need to be many and varied so everyone has the chance to spot or contribute something that turns out to be vital (and will do so at least once per game). As with everything in game design it’s a balancing decision, increasingly complexity can be risky, but I feel that a cooperative game should push the sorts of problem that they create past “What can a player do” and into “What can a group of players do.”

So in the end I decided to retain the differences in kind, they add a lot more than they take away, but in other designs and other situations a more streamlined approach would be desirable. It’s always worth looking at aspects of games for ways to simplify them as such simplifications offer a host of advantages in making a game easier to learn and cutting away everything but the core draw of the game and focusing on doing that exceptionally well.