So lately I’ve been taking a break from serious gaming and trying out some new things, among them is a gem called Cube Quest. This is a game in which, broadly speaking, you roll dice in an attempt to eliminate your opponents pieces. I say “broadly speaking” because by “roll” I mean “flick across the table at your opponents dice army” and by “eliminate” I mean “wildly scatter from the table causing them to become lost in a sea of unsorted game parts”. 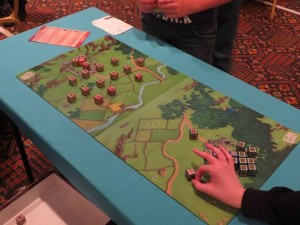 Playing it has made me consider how a lot of typical aspects of game design do or do not apply to the design of dexterity based games. Specifically I’m concerned with the dexterity based element, an involved game that uses dexterity for the resolution of a particular mechanic is really just using a specialised type of semi-randomiser and is designed traditionally, but a primarily dexterity based game needs some additional considerations.

Accessibility is a problem that needs to be approached differently for a dexterity based game. With traditional game design if using a particular mechanic well is beyond the grasp of a beginner this is a surmountable flaw, as two new players can still enjoy playing against each other and will eventually develop the mastery if they enjoy the game enough to keep at it. However if a dexterity based game requires an action that is entirely beyond the skill of the players the game may not be playable at all, for instance  a mechanic based on how long a player could juggle several of the components would fail entirely if the players did not know how to juggle. For this reason most dexterity based games need to be based on very simple skills that every person possesses, but then must find ways to increase the difficulty. For instance having the cubes far apart, making it desirable for them to land a certain way up, making the position your cube winds up in after striking the target important and so on.

Come to mention it, In a Bind that I discussed a couple of weeks ago does this in a much more direct way. The instructions are simple to the level of “Put your hand on your elbow”, but increase in difficulty simply by virtue of the number of them that there are.

The nature of luck in dexterity games changes too. I’ve written before about the way in which people perceive probability, but adding a dexterity element changes this. Taking a physical action and getting immediate feedback on what the result of this action is makes feelings of agency very accessible. Rolling a 1 never feels like it was in your control, you could not meaningfully have done anything differently to avoid rolling a 1. However failing a dexterity challenge almost always gives some idea about how you could have done it differently, even if it’s just “I should have aimed a little to the left”. It makes it easier for players to feel responsible for the outcomes of their actions, which can be both a blessing and a curse to a designer.

To a large extent players will judge a game based on how it makes them feel to play it. In a dexterity game producing a positive feeling here seems like it should hinge principally on making successful player actions generate results that are more positive than unsuccessful actions generate results that are more negative. Essentially you want the thought “If I can just get this right it’ll be amazing…” to come up more than “I best not fuck this up or I’ll lose…” though both at once can be spectacular.

The nature of this sort of effect can change with the skill or experience of the players. In some games a new player will be frustrated by seeing their opponent put them into a difficult position rather than take an action to improve their own standing, but a more experienced player will take it in their stride. I sometimes wonder if this is due to the experienced player recognising it as a consequence (further removed) of their previous actions rather than something their opponent did to them that they had no control over. 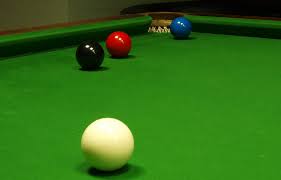 Having not created and playtested one myself I’m not sure how it works out, but my instinct is that the error rate that players have would make the design more challenging. If I’m working on a game I can usually get an idea for how well a player will deal with a particular situation based on their level of experience and talent, to the point of being able to make statements like “About 30% of new players will make the wrong move in this situation.” That’s something I find useful in balancing the various options that a game offers.

It feels like this would be harder with dexterity based games since the variability between players starting skills would be more dramatic and the rate at which experience with a particular task improves performance would be much higher. Possibly occurring significantly within the scope of one game.

I’ve already written about the merits of handicapping systems in terms of letting players of different skill levels compete, I think I’d be more inclined to include such a system in dexterity games than in other genres. Perhaps there’s a reason that such things are more common between sportsmen than board gamers in the first place.

In any event, I do have a dexterity game on the drawing board at the moment, so I’m sure I’ll get a chance to wrestle with these issues at some point in the future. Remember this post, so that when Heist is underway we can all look back on it and laugh 😉