Sorry there was no post last week – I was launching the Scandinavia and the World Kickstarter. If you enjoy this blog then please take a look and see if it looks like your sort of game. In return I promise not to talk about it for the rest of the post and tackle a game design issue instead. Today’s topic: Special abilities for characters in cooperative games.

Ability design addresses a variety of problems. The weight that you assign to these aspects of your design will influence the character of your game, so it’s worth considering.

Theme: An ability can carry the idea of being this particular member of a team, helping a strongly thematic game to deliver on its premise.
Variety (individual): An ability can make a character feel sufficiently different to play that playing the game again is a fresh experience, making the game more replayable.
Variety (group): An ability can contribute to an environment in which the combination of abilities available noticeably distorts he game, making the game more replayable even for someone who’s kept the same character.
Contribution: A good cooperative game should give everyone the feeling of contributing something meaningful. A good ability will give a player an opportunity to make a meaningful contribution that couldn’t have been done by just anyone.
Coordination: A good cooperative game makes it feel meaningful to cooperate. So a well designed ability should reward players for coordinating its use rather than simply maximising their own effectiveness.
Isolation: This may sound strange, but it’s also good for an ability to involve some degree of isolation in its planning or use. Cooperative games can suffer from one player telling everyone what to do, so abilities that counteract that are good.

These can also all be inverted. So for instance rather than rewarding successful coordination, you can have an ability that penalises a failure of coordination.

Since the answer to “What should you do about this?” is so unsatisfying (“It depends on the needs of your game and there are lots of ways to do things”) we’ll instead take a look at existing abilities and analyse them in the context of these six factors. 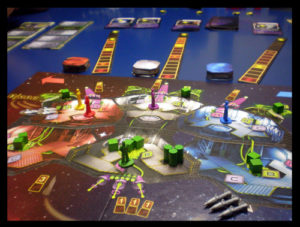 In this game players are coordinating to rescue a space station from at least reasonably likely doom. There are six spaces on the board (seven if flying around outside counts) and the advanced teleporter can execute their ability to have the following effect:

“All players in one of the four corner rooms of the board are immediately teleported to the opposite corner.”

Theme: This is pretty strong, a teleporter fits the scifi theme and being able to get somewhere quickly matches the essence of teleportation. It certainly captures the feeling of rapid movement since it’s allowing several players to each get three turns of actions (in a 12 turn game) instantaneously.
Variety (individual): The Space Alert unique abilities are “once per game” affairs, which makes it hard for them to lend individual variety. 11/12 turns you’ll probably do the same thing you would’ve done with a different ability…
Variety (group): …However if you have four players and every player kicks out an ability that affects the whole group then you’ll spend a third of your game dealing with the repercussions. So it could contribute to group variety along with three similar powers.
Contribution: Since so much of Space Alert boils down to “Can we do the thing in time?” being able to zap several other players into position can feel like the move that saved the day.
Coordination: This is an example of both positive and negative coordination. You could use the ability just to get yourself somewhere quickly, but you get more out of it by moving several players usefully at once. On the other hand the teleport is not optional – you could easily ruin everyone else’s plans by failing to coordinate. This ability passes this test more strongly than any other I’m going to discuss.
Isolation: Space Alert depends upon a tight time limit to encourage players to make their own decisions. Someone else could try to demand the teleporter use their power, but the game makes it hard for them to meaningfully do it. Ultimately the isolation value of this ability is driven by the rest of the game design, rather than the other way around. 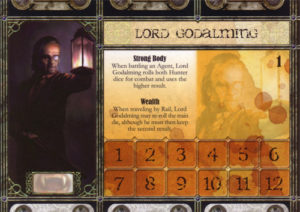 Next Up: Fury of Dracula

Lord Godalming has two abilities: Roll two dice vs minions and reroll the train die. Arguably he has a third ability in having a higher than average maximum health.

Theme: It’s been a long long time since I read Dracula so it’s hard to comment on how well it works relative to the source material. Two dice is a significant advantage in the combat system, so it feels “strong”. It’s harder for the train reroll to make you feel wealthy though – it feels like a lord would’ve have a 1 in 3 chance of having the conversation “I’m a very wealthy man, can this train possibly go faster?” “Ah, wealthy you say? In that case you’re banned, get off the train.”
Variety (individual): The power of these abilities is noticeable, but it doesn’t create a difference in kind. A train reroll means you notice the difference between East and West Europe more (The only difference being the speed of the trains on a maximum roll) but at the end of the day you’ll take very similar moves no matter which character you are. So much of the game is finding Dracula and closing off his escape routes that you’ll much more often experience “Your most important attribute is being in position X” than “Your most important attribute is anything special you can do.”
Variety (group): This game uses the same four characters each time, so this attribute doesn’t apply.
Contribution: With no easy way to predict exactly where the physical fights are (as opposed to other hazards) it feels like more luck than judgement when the ability matters. The game gives plentiful opportunities to make a meaningful contribution, but being Lord Godalming rarely contributes.
Coordination: These abilities don’t directly influence other players. There may be edge cases where a bit of coordination will make it so that you take the train while someone else takes the road rather than the other way around (which is a bit more reliable owing to your reroll). Overall though, coordinating ability use is not particularly rewarded.
Isolation: The ability does nothing to stop one player trying to calculate the optimal moves and disseminating them. However, again the design of the game has an impact here. Dracula is sitting right there. Listening to everything you say. Is it really better to state your plans out loud than to trust your friends to make good decisions? 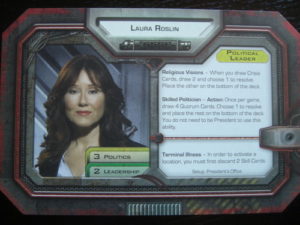 The third and final choice for this post: Battlestar Galactica

This also isn’t a cooperative game. Since this was a whistlestop tour of ideas I wanted to touch base with other types of game that rely on similar things in their abilities but also to highlight how they make things different. BSG is a traitor game, which means it plays a lot like a cooperative game, but ideal abilities will have an additional attribute: They will allow a player to hurt the groups chance of success without it being obvious.

Roslin has two abilities and a drawback – her main “use every turn” ability is: When she draws a crisis card she picks two and places one of her choice on the bottom of the deck. Once per game she can draw a bunch of (essentially) major political action cards and choose one. Finally she needs to discard cards to use room actions.

Theme: Politics, religion and and illness hit the major notes for putting her character across. The connection between the theme and mechanics on two of them are a bit weak though, a terminal illness doesn’t make activating a location particularly more stressful than any other sort of meaningful activity.
Variety (individual): Activating locations and dealing with crises are core parts of the game, modifying how these happen make her play differently to other characters. There’s also a social dynamic added by choosing a crisis in that players can’t see what you discard, but what happens is likely to be closely scruitinised.
Variety (group): A game with Roslin in doesn’t provide a huge difference in kind in what the group as a whole can or cannot do. Certainly there will be times that she’s very relevant but I don’t hear BSG players say “Do we have Roslin?” in the same way Pandemic players say “Do we have the medic?”
Contribution: Choosing a crisis is impactful, but in quite a low key way. A player might not see much recognition for burying the crisis that wins the game (they might not even know they’ve done it) but the ability still permits a meaningful contribution. The once per game power provides a lot of opportunities that can have some spectacular results and scores much more strongly in this category.
Coordination: This is probably the weakest aspect of a set of abilities that otherwise tick all of the boxes. The crisis choice can be meaningful in terms of selecting a crisis that’s easily dealt with by the combination of other abilities and assets around the table but there isn’t really anything there that another player could do much to take into account in their actions.
Isolation: All three of these abilities need to be used without the other players (who aren’t allowed to see the combination of cards your choosing from – either to pick one or to discard) so this is character that’s exceptionally difficult to dictate to. 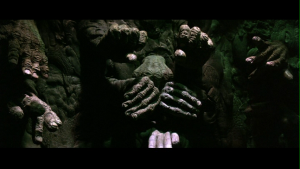 So what do we take from these examples for our own cooperative abilities? I think there are four important things to bear in mind:

Relative power is important. The Teleporter and Lord Godalming both had movement powers – but the Teleporters ability was worth three turns of movement while Godalming’s is worth one at the very best (and might just fail). If an ability is to feel impactful its worth relative to not having the ability needs to be carefully considered.

Coordination is bidirectional. An ability that lets you take others skills into account and play a move based on coordinating with them does not guarantee that they can meaningfully coordinate with you. Ideally a cooperative ability will work both ways around.

Secrets are useful. If an ability either relies on hidden information (cards in hand) or creates it (draw two cards and…) then the individual will make the decision rather than having their ability co-opted by the table as a whole.

There are other factors that make good cooperative ability design. The main one I didn’t happen to touch upon with these examples is synergy (abilities directly or indirectly having a multiplicative effect when applied together) but I’m sure there are more. What’s the greatest cooperative ability ever written?

Play nicely together, backstab rarely but well and happy gaming 🙂