I’ve been playing a lot of Magic: Duels lately and consequently have been spending a certain amount of time swearing at the frequency with which I get hands that either consist entirely of or are entirely devoid of lands. Thinking about how likely that is opened the floodgates to a ream of ideas about card games in general, so let’s dig in: 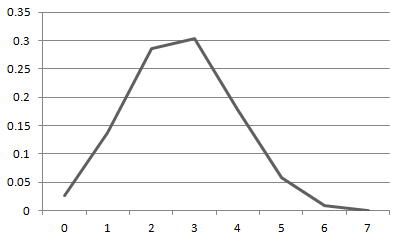 Before I get too far into this topic, let’s do a little bit about Magic to contextualise it – you can skip this if you’re a Magic player (And if you’re not, don’t worry, we’ll talk about other games in a bit). The important thing to know for our purposes is that your cards are divided into lands and spells. In order to win you’ll generally want to play lands in order to be able to play spells. A hand with only spells is bad because you cannot play any of them, a hand with only lands is bad because they can’t do anything to help you win on their own. Depending on your deck you might be hoping for 2-4 lands in your starting seven card hand.

For this example I’m assuming a deck with 23 lands and 37 spells, which is reasonably typical. So looking back at the graph you can see the most likely outcome is drawing 3 land (at 30.29%) followed closely by 2 and the extremes are vanishingly unlikely.

So how does this compare to dice? Suppose I’m not drawing seven cards from a sixty card deck, but instead rolling three sixty sided dice – what happens? 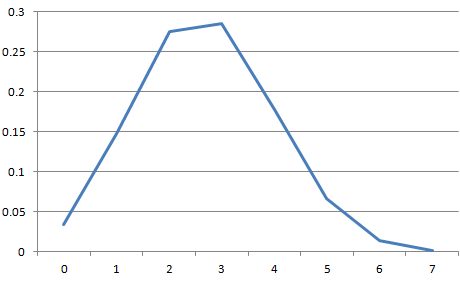 The shape of this distribution is totally different! The move from cards to dice has left us…actually that’s pretty similar.

There are differences though – it’s more obvious in some places than others, but you can see that the central results (2-3 land) are a little less likely with dice and the extreme results are a little more likely. What’s going on with that?

It’s simply a consequence of removing cards from the deck as they’re drawn. If you’ve rolled all land on your first six dice, dice seven is still just as likely to roll land. However if you’ve pulled six land cards from a deck, only 17 remain, so the odds of the extreme result are reduced. Essentially using cards over dice will produce more consistent results.

(Though after the fifth “no land” hand in a row it doesn’t fucking feel like it.)

The difference in an initial hand of magic is quite subtle, but they become more pronounced as decks get smaller. Let’s consider the same comparison, but for copper in the opening hand of a game of Dominion: 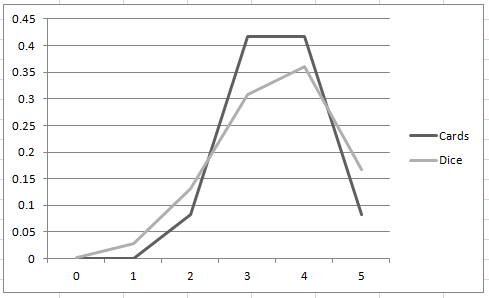 In dominion you have a deck of 10 cards, 7 of which are copper and you draw 5. As such you can’t possibly draw only 1 copper (since you are drawing 5 cards and there are only three not-copper) so comparing the deck of 70% copper to the dice of 70% chance of copper shows some divergence pretty early on. This sort of divergence is great for balancing games in different ways, the card based version of Dominion gives players a more even start than its dice based equivalent.

Always remember that a fairer game is not always more desirable – the game needs to have the right attributes for its goals – but it’s good to know how changing your tools gives different opportunities. So is that the limit of what we can do with cards?

Let’s consider the impact of drawing a card vs drawing a card that lets you search the deck for the card that you want. Consider two situations in Last Night on Earth – I’m doing the quest involving rescuing all of the NPCs. There’s a card called “Just what I needed” which lets me look through the deck for anything I want and take that.

Suppose there are 20 cards left in the deck and I’m going to manage to get 10 of them before being eaten by zombies. I need to find two more NPCs, which is more desirable: A deck with 2 NPCs and 2 “Just what I needed” or a deck with 4 NPCs? 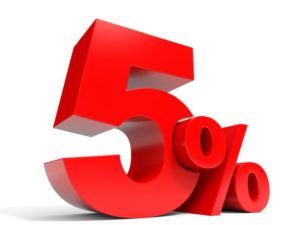 The difference in success between these scenarios is a little over 5%. The 4 NPCs situation will end well 70.9% of the time. The other scenario ends well approximately 65% of the time.

The reason for this is because of how deck searching cards alter the deck. Consider what happens if you get an NPC on your first draw (in either scenario) – there are 3 cards that will help you left in the deck so your odds on rescuing the town on your next draw are 3/19. However if you drew “Just what I need” and searched out an NPC the deck now only contains two cards that can help you – the remaining “Just what I need” and the other NPC – so your odds are only 2/19 of managing that on the next draw.

The fact that deck searching works in this way makes it something that we as game designers can use. For the alert player being able to search something out can be a reward or penalty (depending on the context of the game) which can allow some sneaky balancing choices and a high skill ceiling in which players are taking quite subtle effects into account.

It’s also something that can be used to generate a desired emotional impact without throwing off a balanced element. Consider an effect in a cooperative game like “Search the deck for the biggest monster, it attacks!” this can be great for creating a feeling of tension or danger or appropriately punishing a poor choice – but at the same time it also ensures the necessary downbeat for players to recover from the tough encounter by making the upcoming cards friendlier. 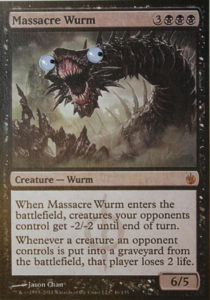 Trashing (permanently removing cards from a deck) works in broadly the same way, but without the card taking effect first – it’s not worth rehashing similar calculations to show it’s value, but it deserves a mention as something that we can do with card based randomisers that don’t work for dice.

Something that does deserve a deeper look is the notion of shared decks vs individual decks. In most deckbuilders each player has their own deck – in a lot of adventure games players draw from a shared deck. Let’s say we’re heavily modifying Talisman and have decided to monkey with the adventure deck.

The adventure deck can be really swingy, sometimes it’ll give you a fantastic treasure that really boosts your character. Other times it’ll give you a monster that you can’t possibly beat, leaving only wounds and pain. To abstract the process we’re just going to call each card good or bad and consider them in those terms.

Let’s consider three systems:
1. The players share a central 60 card deck, evenly containing good and bad cards.
2. Each player has their own personal 20 card deck, again, evenly divided.
3. We have a good and a bad deck. Players flip a coin to decide which to draw from.

Suppose each player has five adventures in the early game – how much difference should we expect due to random chance? 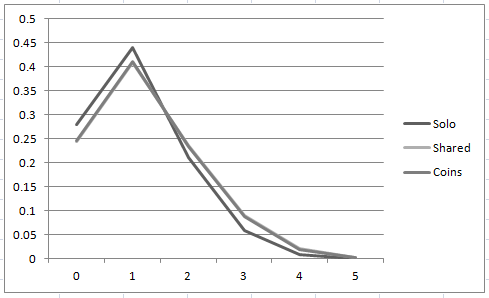 In all cases we’re more likely to see one player getting more good cards than the other than a balanced outcome. There’s not as much to show between the coin flip idea and the shared deck as I’d have predicted – a shared deck feels unfair as if another player draws a great card they’ve not only had a lucky break but also increased the chance of bad draws for other players.

The effect exists – a fair or 1 pt difference outcome is 0.4% more likely with the coin flips than a shared deck – but that’s quite a narrow margin. The impact of splitting the deck into smaller solo decks is much more pronounced.

From a design point of view it’s interesting to think about the point at which the differences between cards and randomisers start to become pronounced. With large decks there’s not much distinction (with an arbitrarily large deck there’s no distinction at all) so lets look at how solo decks play out over a variety of deck sizes: 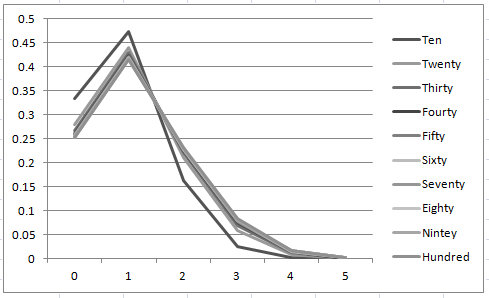 The difference between using a 10 card and 20 card deck is quite noticeable, but everything above that becomes an indistinct smudge. There is still an effect there of course, but it’s much diminished.

This bears some thinking about, in terms of whether there may be times that an illusory effect exists, in which an initially small deck generates a very tight start, but as they bloat chance becomes more of a factor. This would allow a game to give an impression of containing less chance than it does, which could be desirable in some types of game.

Though of course abstract mathematics is just that – abstract – until it’s considered in the context of some particular game then all we’re looking at here is general patterns. Nonetheless, there’s a lot to love about how cards behave differently to dice as randomisers and all of the delicious options that provides for getting new types of game to behave in interesting ways.