I’ve recently been editing the Nightmare cards for Brevity. The game is played in real time and upon receiving a card you have ten seconds to read it, execute the rules on it, propose a trade with another player, agree and swap cads. This is already a tall order and it’s not helped if the wording on the cards is obtuse, so I yesterday I found myself going through it card by card and asking “Is there a quicker way to say this?” Getting into the nuts and bolts of this task has lead me to refine some of the concepts I discussed last month in the simplest rule. 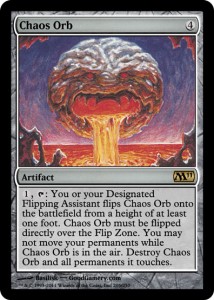 For example: The assimilation nightmares are based around being processed into some sort of identical machine to everyone else. The assimilation restriction is intended to force players to mimic each other in order to be effective, thematically it fits in with the type of nightmare that the card represents. Mechanically it poses a meaningful obstacle to free trade and communication, presenting a challenge to be overcome in service to the mechanical goal of trading until players have matching sets of cards.

The initial wording on the card was something like “Whenever a player makes a trade say ‘one of us’, you may only trade with players who immediately respond ‘one of us'” which does the job nice and simply and avoids various pitfalls identified in playtesting. For instance the condition is repeated each trade so you have a chance to recover the situation by having other people trade if nobody responds the first time. However it causes problems with fast play, the line is a little long to be read in the window allotted and it requires a response to every trade, which goes against a design principle of “You shouldn’t need to refer back to the card after receiving it”.

The wording is reasonably efficient and there’s not a good way to make it shorter without changing the meaning of it. However I believe that it was wrong of me to suggest that this is where the thought should end, there’s the option of looking for ways to change the intended meaning of the word in a way that doesn’t negatively affect gameplay. Essentially looking for a solution to reduce Fidelity. This is the card that I’m testing now: 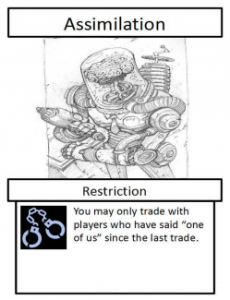 Simply dropping the requirement for the person receiving the card to make the statement obtains brevity without sacrificing precision at a slight cost to fidelity. The rule now doesn’t do exactly what was originally intended, mandating the call and response. However players will generally gravitate towards effective strategies so a mass response of “one of us” when the card changes hands is likely to appear as an emergent property and the loss isn’t so great.

Often in game design improving something requires you to sacrifice something else. A rule to make something more precise winds up being an obstacle to first time learning. A component that makes tracking something easier increases the manufacturing cost. A mechanic that makes the game deeper also winds up making it slower. However the thing that I’ve failed to bear in mind the last time I was writing on this subject are that not all sacrifices are equal. Sometimes where sacrificing one element to achieved a desired result would be prohibitively detrimental sacrificing another can have a negligible negative impact.

False dichotomy is a popular logical fallacy because it’s in our nature to prefer to think of things as existing in opposing pairs, but in designing games this risks blinding us to finding better solutions to our problems. The example that makes this apparent to me today is length vs precision in rules writing, but I’m sure that you can think of plenty of other examples from design. Depth vs complexity comes to mind as one which is frequently cited despite the myriad examples of games in which these factors are divorced. 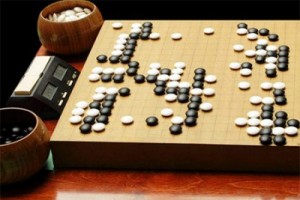 Looking at other games it’s interesting to see where designers choose to make these trade offs in rules writing. I jokingly posted a Magic card talking about the complexity of rules on cards at the start of the post, but Magic is a game that’s had a very active design philosophy relating to this sort of problem. It is played at competition level to a high standard, which requires a very high degree of precision in how effects should be resolved. Additionally it’s trying to appeal to new players, so it benefits a lot if cards do not contain buckets of text.

The Magic R&D team also chose to change what they were trying to do with the cards, rather than keeping lengthy card texts or losing precision by simplifying the text without changing the rules. I stopped collecting around 15 years ago, so it’s really stark when I play my old decks against a current player – they don’t sometimes reduce the font size to fit all of the words onto the card anymore. Instead they adopted what was called New World Order and redefined what was supposed to be on each card in the first place. The notion of a common that needed five lines of text was discarded in favour of more basic effects so that the cards new players encountered most frequently were more succinct while remaining precise enough that they could seamlessly be slotted into tournament play.

This isn’t the only approach though, Munckin has enjoyed overwhelming success by maintaining brevity and fidelity and the expense of precision. I’ve seen groups that take it  seriously stop and poke the internet for advice on how to proceed, but in most cases players play the game as intended despite ambiguous wording. More often than not the correct interpretation is intuitive even if the language is technically ambiguous. 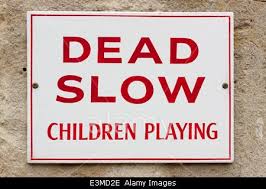 The theme of this weeks post is that we should be sure to avoid limited thinking and to make our sacrifices based on the knowledge of what sort of players are likely to play our games and how they’re likely to behave with them. Whenever it looks like a sacrifice isn’t worth it see if there isn’t some other way to obtain the same result instead.

A flexible mind looks at this image and is aware that we might be being warned not to disturb zombie children while they enjoy a game of ‘catch the spleen’.

1 thought on “Brevity, Fidelity and Precision”