This page lists the most commonly requested clarifications and errata for 404: Law Not Found. 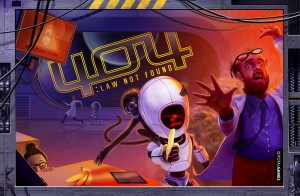 > The text and image for the Cargo Bay setup (page 6-7) do not match
The text is correct, the image is a misprint. There should be two bananas and two pies in the stack, not three bananas and one pie.

> When do humans die when exposed to space?
A human (or monkey) dies at the start of their own individual action. It is possible for a human in a space suit to take a ‘close door’ action and save the life of another human that goes later in the turn.

> Do humans ever use the Trash Burner or Nanolathe?
Humans only activate a machine if it will resolve an event or bring a human back to life. The Nanolathe never does either of these and so will never be activated, they will activate the Trash Burner if it contains the Alien Artifact.
They may, however, load both of these machines in accordance with their usual rules.

> How long will humans continue to load objects into a machine?
They’ll load an object each turn until the machine contains something that will trigger at least one effect on that machine’s room card – regardless of whether that effect is good or bad or does nothing at all.

> Does the monkey still get an action if carried?
Yes, it takes its action as normal.

> Can the monkey move through closed doors?
Yes and it leaves them open behind it.

> Will the monkey eat a human if the ‘Banana Dimension’ anomaly is in play?
Yes. The human is a non-monkey item. The human counter is removed from play entirely, as opposed to being flipped to its dead side, exactly as if it were a banana.

> If the final card in the deck is an anomaly does it end the game?
Yes.
Using the standard rules each game should be ten turns long, this is achieved by having ten non-anomaly events in the events deck and continuing to draw each turn until one is found. The discard pile is public information so if a player loses track they are free to count the events in the discard pile to see if this will be the final turn.

> What does it mean when a directive specified ‘This mission’
This mission refers to the entire game.
Note that the phrase ‘planetary mission’ refers to a specific event card, though the distinction should be contextually obvious (as the things that you are required to do ‘this mission’ can not possibly achieved as part of a planetary mission).

> How long do you have to complete directives that must be done in a turn?
A turn is the space between the ‘reveal event’ and ‘resolve event’ phases, inclusive. For instance Empower War requires two items to have been fired out of the launch tube in the same turn, it can be completed by a human firing one and then a robot firing one.
The phrases ‘human turn’ and ‘monkey turn’ would be better read as ‘human phase’ and ‘monkey phase’ so as not to be misleading with respect to the duration of a turn.

> Is a human “in space” if it is carried by a robot in space?
Yes. A carried item is located anywhere that the robot is located. This is also true in the context of items still being “on the ship” while carried by robots that are not in space.

> How do you repair a point of damage for the ‘Organise Ships’ directive?
Activating a damaged machine repairs it, removing the damage counter. This process is considered repairing a point of damage.

> The FAQ for ‘Categorical Imperative’ makes no sense given the card text.
The FAQ entry refers to a previous version of the card and can be ignored.

> My problem with the rules isn’t covered here.
Feel free to leave a message in the comments, email me at [email protected] or post a thread on the BGG page. If there’s an error in the rulebook it’ll definitely be reported here, if the rules are correct then I’ll still post your question here if there is an ambiguity or the rule is well hidden or a lot of people message me about the same thing.